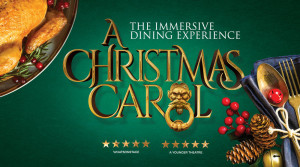 Known for producing unique, intimate theatrical experiences in non-traditional venues, York-founded company The Flanagan Collective are teaming up with two local charities this month to make its immersive dining adaptation of A Christmas Carol extra special. The company has commissioned St Mary’s Church in Sheffield and York Nurturing Community to provide the two-course meal which takes centre-stage during its rousing rendition of the timeless classic.

Two actors play numerous characters from the well-loved tale through song, parlour games and a spot of spirited trickery. And the best gift this show has to offer? The Collective are practising what their characters preach, fully embracing the Christmas spirit of generosity and goodwill and making theatre a force for positive change.

The two community charities are providing a Christmas feast in between acts of the “foot-stomping” production, also catering for special dietary requirements. Profits will fund the charity’s core costs “so we can keep the doors open and the lights on”. Producer Dan Ball says, “When we heard about these two organisations we just knew we wanted them on board for our production, now in its eighth year. What better way to make the spirit of the story come to life, than by using food that’s environmentally friendly while generating income for charities that help people from the cities we’re performing in?”

Last year, St Mary’s Church worked with FoodCycle in Sheffield serving 6,072 meals and saving 10 tonnes of food from landfill through 5,169 hours work. York Nurturing Community aims to give people a welcoming place to take a break, with or without children. It serves hot meals prepared with intercepted surplus supermarket food on a pay-as-you-feel-basis. Its profits go back into its activities which include work with adults with learning difficulties, refugees and post-natal groups. The charities’ hospitality arms help to fund these core principles, and it is hoped that working with A Christmas Carol will also raise awareness of the vital work they do.

We spoke to Al Barclay, who plays Scrooge, dons the nightie for his fifth year: “Still the show adapts and deepens every time we do it. Tom Bellerby [Co-creator with Alexander Wright] will always adjust it for the new political landscape and think about what we can improve on the previous year. If anything, in the five years I’ve been doing this the message of coming together with your fellow man, generosity and kindness is more relevant now than it ever has been.”

AY: How do you stay on your toes in an interactive, immersive experience, where you’re sitting down and eating while acting?

Al: We don’t eat. I could do, but I lose my appetite while I’m working. I’m up and moving constantly in the dinner section, talking to the audience and connecting them to one another through the information they give. As long as you take yourself out of the equation it’s easy to stay on your toes, because to a large extent, anything goes.

AY: Is it tricky staying in character?

Al: There’s a delightful contract. The audience know I’m an actor but they are pretending I’m Scrooge. Sometimes they tell me it’s a “lovely show” and I’ll, of course, ridicule them for thinking they are at the theatre when it’s evident that they aren’t. A twinkle is perfectly permissible and sometimes it’s fun to get a little meta-theatrical as long as the story is upheld. Often I will laugh as both actor and Scrooge if something out of the ordinary happens. It’s all part of the fun.

AY: How far can the show stray from the path?

Al: We know it well enough that we can say yes to whatever comes into it and then bring it back. If things get too out of hand, Scrooge can drop the fourth wall for a bit.

AY: What’s it like working with The Flanagan Collective?

Al: I’ve known them for so long now that it feels like family. Delightful.

AY: Why these particular two charities?

Al: We always seek to work with local charities who deal with poverty, homelessness and waste. This redemptive story helps us remember that no matter how bad we think things are for us, it’s never too late to turn a corner by connecting with people. And when we think of Cratchitt’s family eating every possible scrap of goose, we notice how wasteful we are capable of being with food nowadays.

AY: What’s the link between A Christmas Carol and food?

Al: The Spirit of Christmas present has a large portion dedicated to lavish and detailed mouth-watering descriptions of all the comestible delights you can imagine. We thought we could solve that with a feast!

AY: If you invited all the characters from Dickens’ book to a bout of Come Dine With Me, who do you think would win and why?

Al: I think it would be Mister Fezziwig. He’d win over all the others, and the party would be so good that they’d overlook the fact that The Ghost of Christmas Present was a better cook…

The show runs at Theatre Deli, Sheffield until 16th December before transferring to Mansion House, York on 18 December for five nights. Tickets start from £35 and include the two-course dinner. Book at theatredeli.co.uk or yorktheatreroyal.co.uk.