The Grand Old Dame of York: A custard bye forty years in the baking 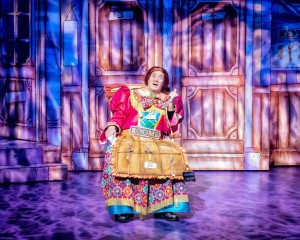 Berwick Kaler as The Grand Old Dame of York, Photograph by Anthony Robling

Well, here we all are again back for the annual rubbish at the York Theatre Royal pantomime, but with one big difference – 2018 is dame Berwick Kaler’s final year after forty years of writing, co-directing and starring in York’s most popular panto. There has always been something homely and comforting about hearing those Geordie tones cry out, “Me babbies me bairnes!” once a year – and this year the moment is delayed by a slightly over-long opening where the rest of the cast ponder what panto they will be doing and whether the script has even been written yet.

“This rubbish has been recycled for forty years!”

The plot never arrives, but it doesn’t matter much anyway as The Grand Old Dame of York is more of a panto best-bits full of set pieces and classic tropes, with visits from the ghost of panto past and the ghost of panto future. As always, and as in many pantos of the land, there are the quick changes (a particularly funny scene has Kaler switching between his dame character Molly Motley and her husband), the buckets of water and custard pies (long-suffering Martin Barrass getting the brunt of it as ever), and the song-sheet and shout-outs (try getting Baby Shark out of your head afterwards), but of course this is not just any panto. Endlessly self-referential and meta, one can only imagine what a newcomer would make of the show – and so, the panto’s best features – the returning characters, the in-jokes, the family atmosphere that has been honed over the years – are also its most alienating. Families looking for an easy-to-follow fairly-tale should look elsewhere.

The songs make full use of the talented ensemble and children’s cast, and include interesting nods to musicals such as Everybody’s Talking About Jamie and Little Shop of Horrors. Another highlight is Kaler’s solo Ever the Best of Friends, which he sings on his rocking chair as the set is dismantled behind him by the stage crew. Most of these inspired moments land in the first half, and the show is not without a couple of bum notes; particularly making non-P.C. jokes and then complaining that everything needs to be P.C. these days. It’s tired and unnecessary in a show that doesn’t need to and shouldn’t resort to this.

Who knows what the future of the York Theatre Royal panto holds, but there is enough talent in the cast and crew to ensure it continues to shine without its star. David Leonard (who himself has been in twenty-nine York pantos), is superb as the baddie we all love to hate – clinging on to a very thin semblance of plot as he tries to banish Kaler out of The Land of Wonderful Lovely Thoughts into a land where everyone is miserable (Lancashire). Suzy Cooper gurns, sparkles and tangos her way through Alexa Motley and even gets a turn as an evil sidekick, and A.J. Powell continues to prove himself a fan favourite in various guises and high-heels.

The Grand Old Dame of York is a fitting send off for Kaler and will not disappoint loyal fans, who will most certainly remain babbies and bairns long into 2019 and beyond.

The show runs until 2nd February 2019. Get your tickets here.