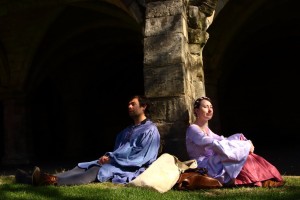 Adam Elms and Gemma Shelton in Tales of Bacon

Tales of Bacon is a comedic romp through fourteenth-century England, following Elfrida Deverwyck (Gemma Shelton), a ballsy and unapologetic protagonist determined to trek across the country to find her true love, by chance teaming up with Thaddeus Bacon (Adam Elms), a pardoner who delights in offering salvation to the sinners of the land – for enough gold, that is.

Elms plays the cheeky swindler perfectly, bringing levity and charm to a character that could easily have turned slimy. His co-star, Shelton, gives a wonderfully winsome performance as Elfrida, and confidently commands attention in every scene. The duo bounce off each other playfully and together their dynamic forms the core of the series.

Tales of Bacon is littered with allusions that any medievalist (or history buff) will relish, with a spectrum from ‘Geoffrey Chaucer walks into a bar’ to ‘referencing the disputed reign of a twelfth-century queen’. Inclusions of historical trivia feel thoughtful rather than shoehorned, and there is something for everyone to enjoy in Natalie Roe and Max Gee’s script.

Location and sound are also vital elements which help to bring the story to life. The series makes great use of York and the surrounding area itself to establish a truly authentic setting, using the historic city walls, churches and structures as backdrops to denote a sense of time and place. When music is used, the effect is genuine and delicate – in places a little too delicate, as some scenes feel as though a soundtrack could aid the actors as they bring drama and tension to a sequence.

The series was crowdfunded and produced on a shoestring budget, and it’s evident from the lovingly-researched script and polished cinematography that Tales of Bacon was a labour of love, which makes for a genuine and charming viewing experience.