The Cult of K*nzo: One of a kind 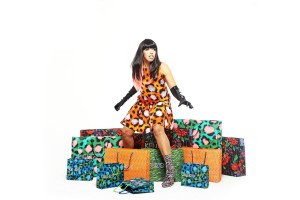 Paula Varjack in Cult of K*nzo – Photo by Nikolas Louka

Directed by Martin Bengtsson and billed as a playful critique of consumer culture through the lens of high fashion, The Cult of K*nzo is a riotous, colourful indulgence of enabled, regressive fandom, from the fantasies to the grandeur to the raucous, unadulterated sense of humour of childhood. Writer-performer, multimedia artist Paula Varjack, has the energy of an enthusiastic eight-year-old, her passion for fashion driving her through poignant, peaceful narratives on the history of her icon to deadpan mockery of catwalk dressage folly, to delightfully cutting narration of television ads.

To write about this show does it no justice – the joy is in the live dynamism of Varjack’s persona and her masterful stage-holding, as well as the richly honed video presence projected larger than life in the studio. Vignettes of anime fairy tale music and Japanese ink sketching accompany sweetly honouring entries from what appears to be Varjack’s diary, dedicated to her hero’s life story. She makes a studious project of her chosen field.

KENZO garments hang tantalisingly along a diagonal stretching up toward the ceiling, elevated above Varjack’s excitable figure as her protagonist, ‘She’, creeps into her grandmother’s wardrobe to ogle the exotic items there. Here, between the couture and the Chanel No. 5, a lifelong desire for luxury is born.

Stalking high end clothing outlets, observing her prey like a xenomorph before assuming their form and performing the role for the haughty shop assistants, She is utterly endearing, ridiculous and brazen. You’re on her side as she wheedles out meticulous choreographies, willing her conspiratorial disguise to transcend the upper class tiers of the impenetrable fashionista universe. She bemoans the baffling paradox of trying to look rich enough to own a ‘passport’ into these spaces, while the truly rich dress in understated outfits.

The competitive element is instantly recognisable across fandoms, implicating fan praxis in consumerism via contests of dedication. How many hours, dollars, pounds, would you spend on your chosen idols? There’s always someone more willing in their worship, some extra mezzanine level of achievement to unlock, that keeps us striving in our devotion to a brand. The collection is never complete.

The anxiety of belonging, of being a member in an exclusive (or so we’re told) club, runs all the way back from Kenzo Takada’s origin story and before, highlighting the irony of class intersections with consumerism, elitism and mass production. Necessity is the mother of Takada’s inventions, humble beginnings becoming a signature style that eventually discards its limitations and appropriates itself endlessly through the reflections of its infinite wearers, illustrated in a gut-punch of vox-pop and social media montage multiplying across the room, bringing Varjack’s fierce warrior down from her podium of singular pride to the centre of a saturated crowd.

This is a show and performer you need to see.

The Cult of K*nzo continues on its UK tour, tickets available here.