Same Same Different: a sense of belonging for the trans-racial adoptee 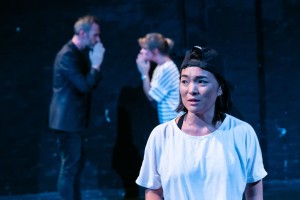 Writer Naomi Sumner Chan’s new verbatim play Same Same Different diverts from the widely-told adoption fairy tale that follows parents through the process of trying to adopt, where adoption is the happy endgame. Here she examines what happens after the happy ending, the “tainted golden ticket”; how adoptive families sculpt themselves and their unit, and what residual questions remain for – particularly trans-racial – adoptees.

Adorning the black box York Theatre Royal Studio space is a minimal set by Irene Jade, featuring muted seaside colour-wash and beige boxes and screens and a small tea tray, hinting at both Chan’s Chinese ethnic heritage and the domesticity of a middle-class playroom. Soft, tinkly chill-pop woodwind by Dan Pyke completes the setting for this gentle pieces that nudges at the boundaries of our comfortable expectations of the adoptee experience.

Directed by Alyx Tole with dramaturgy by Philip Osment, the performative element in presenting Chan’s findings from her journey is there only to make the words heard. There are no frills or thrills about what is essentially an evening of snippets of diary-style disclosures, research key notes and conversations with adult adoptees and young families, played interchangeably by the diverse ensemble: Houmi Miura, Paula Henstock, Stefan Gumbs, Kattreya Scheurer-Smith and Duggal Ram. There is an air of each actor having been given license to be completely themselves, switching hats on occasion to uphold others’ stories in a simple, clear manner. Accents are predominantly southern English, RP or London, denoting a noticeable layer of privilege that interacts with the characters’ situation as adoptees. Their racial identity is further complicated by a poignantly dissociative recurrent theme of feeling “white on the inside; brown on the outside”. Mirrors, appearing in little pockets dotted all through the action, form an effective symbol of the trans-racial adoptee’s search for likeness and belonging.

The script comprises a limited set of questions repeated several times, sometimes even with the same subject, with a persistent focus on “What do you think makes you similar, or different, to your family?” The effect is a somewhat laboured interview implying one main area of interest for the creator, without much hint at how the findings are to be applied in any way.

One moment of revelation comes when Chan’s (played by Miura) adoptive parents casually drop the fact that her birth mother was also an adoptee, causing her some frustration at the previous withholding and now careless presentation of a seemingly vital puzzle piece of past decisions that have sculpted her identity. Delivered at a steeped pace and including meta references to the project itself and what will be used in the show, the energy is at times charming but often self-congratulatory; a few too many pauses left for laughter that doesn’t manifest.

Perhaps best aimed at children of an age when they are first discovering the meaning of diversity, as the level of address is very accessible and the sentiments enacted as if they are surprising and new, what the show does do well is cautiously pose questions that contradict our collective twee mottos focussing on love and simplicity. As Chan states, “Yes, DNA matters. I need more than love. I need my biology.” She wonders aloud how much of our self is innately universal, human, chosen from within or sculpted by our genetics or surroundings. She is unsettled by the concept that facial features can be willed to change, to adapt to that of an adoptee’s family due to a subconscious urge toward connection. Drawing on vampire lore, Chan states that “To deny someone a reflection is to villainise them.” But perhaps, this show is just the thing you’re looking for.