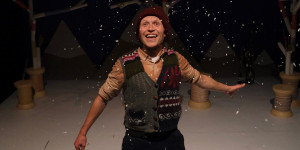 Alex Wingfield in The Boy Who Cried Wolf, Photo by Brian Slater

Leeds-based children’s theatre powerhouse return to York Theatre Royal, and once more prove that they are experts in spinning a yarn.

I admit I am a massive, unashamed fan of Tutti Frutti. I have said many a time that their show Underneath a Magical Moon is one of the finest pieces of theatre I have ever seen, so I was very excited to see “The Boy who Cried Wolf”. This show has toured before, many years ago, and has a reputation that already precedes it. The foyer was abuzz with the chatter of parents who have seen the show before and are revisiting it with their younger children.

The York Theatre Royal studio is awash with white and a backdrop of ice-capped mountains as we enter, but it feels far from stark and cold as the trees are lovingly covered with hand-knitted warmers. We are greeted by three friendly nattering knitters who are to be our guides through the story. The show bursts into song with a clickety-clack and the audience are swept away to a small isolated village where the winters are cold but hearts are warm.

At the core of the show is its incredible ensemble cast, who slip with ease between a myriad of characters, from our gossipy knitting narrators to a loving but struggling family, to the “Baaaaad Boi” hip hop sheep in their care. Alex Wingfield’s Silas, “a bothersome broth of a boy”, is engaging and endearing, more a boy struggling to find his place in the world rather than the naughty little liar often portrayed in “faithful” retellings of Aesop’s fable. Florence Russell’s Mother is recognised by the parents in the audience. The love, the frustration and the feeling of helpless failure played out beautifully through a tired voice and forlorn eyes. And Guido Garcia Lueches’ Grandad bonds them both together; half jovial old man, half all-seeing elder who tries to guide Silas through his confusion.

Hannah Sibai’s matchbox village reveals itself as a set of snow-covered Russian dolls; its small, warm glow only highlights Silas’ solitude on the mountainside which drives him to become the titular Boy Who Cried Wolf.

The show proves once more that the team-up of Tutti Frutti and writer Mike Kenny is a recipe for theatrical magic.