A View From The Bridge: “How dark the room became when he looked at me” 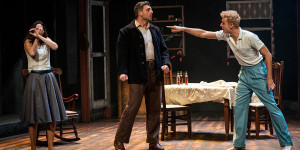 Lili Miller (Catherine), Nicholas Karimi (Eddie) and Pedro Leandro (Rodolpho) in A View from the Bridge, Photo by Ian Hodgson

Directed by Juliet Forster (Romeo & Juliet and A Midsummer Night’s Dream for Shakespeare’s Rose Theatre; Sense and Sensibility for Theatre by the Lake), Arthur Miller’s potboiler case study of community, betrayal and control returns to 1950s Brooklyn in a straightforward co-production between York Theatre Royal and Royal & Derngate Northampton.

With naturalistic costume and brutalist set design by Rhys Jarman, subtle but powerful lighting by Aideen Malone and understated composition by Sophie Cotton, the focus is framed aptly on the little square of dining room inhabited by Eddie Carbone (Nicholas Karimi) and his wife Beatrice (Laura Pyper) and her niece Catherine (Lili Miller), and later by Beatrice’s Sicilian cousins Marco (Reuben Johnson) and Rodolpho (Pedro Leandro). Robert Pickavance picks up the narration as the lawyer Alfieri, a seemingly removed but impassioned observer to Eddie’s warpath and the titular bridge between the two cultures of Italy and America, though this feels a tenuous, vague link here.

Respected longshoreman Eddie lives a life of seeming stability in a tight-knit immigrant community bound by moral codes of justice and honour, before the arrival of the cousins triggers deep-rooted issues of control and authority Eddie has been wielding over Catherine and Beatrice. The threat of their potential freedom from him has him churning from the first scene, and the constant anticipation of his machismo outbursts sets your teeth on edge throughout the 2 hour 20 minute run time.

The perfect storm of our zeitgeist failings raise their ugly heads in this aptly-chosen script that boils a man down to oppressive, manipulative toxic masculinity and shows immigration law for the hypocrisy it is, and always has been. Karimi’s Eddie never once simmers down, bubbling over the surface of rage and shouting for much of the performance. He plays him like a spinning top; not steadily escalating but frighteningly on edge from minute one, giving the events of the play an ominous feeling of inevitability that doesn’t really translate through Alfieri’s speeches on the fact. On seeing new models of masculinity before him in the nurturing Marco and light-hearted Rodolpho, Eddie externalises the bitterness of having accepted his one option of how to be, to devastating effect on his family, his community and, as he yells out his own name repeatedly, his hold on himself.

Forster says of the casting, “I am interested in the migrancy themes in the play, and in some respects I was interested in expanding the relevance of the story beyond the very specific Italian-American setting by recruiting a very mixed cast. People with roots in lots of different parts of the world because this is a play that spreads out into being quite a global issue instead of being focussed on just one community.” Drawing on Miller’s intent regarding Eddie’s place within his community, Forster’s cast enlists a community ensemble as quiet reminders of the continuing lives surrounding him. Their judgement withheld until the end, when Eddie’s behaviour strays further from his control and from the codes of their society, it is all the more felt when their eyes turn shamefully upon him at the end.

Some nice touches include the hints of manual industry in the hanging ropes and crates, one of which descends slowly throughout the opening dumb show to prophesy Eddie’s gradual slide from control. The Carbones’ home is built from bare-bones decor assembled via pulleys, indicating Eddie’s values of modesty, humility and being a provider. Though the female characters are woefully under-written, the actors all give solid performances, and Johnson, Leandro and Karimi are stunning. The two overlapping fraught trios revolving around Eddie are palpable, panting dervishes that will set your night alight, wherever your sympathies lie.