The Beauty Queen of Leenane: theatre at its best 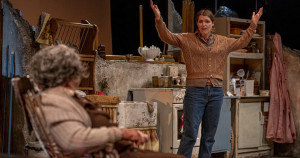 Trapped together in a poisonous cycle of daily battles with endless rain driving at the walls, Maureen dreams of escape. When a chance for “anything… anything other than this…” arrives in the form of unexpected suitor Pato Dooley, (Nicholas Boulton) she dares to hope. Amid comic appearances from Pato’s younger brother Ray (Laurence Pybus), Mag and Maureen’s toxic relationship unfolds in dialogue bursting with bitter dynamism and fury barely kept at bay, power turning on a hairpin inside incongruously benign lines.

This is an expertly formed production and the only way McDonagh’s writing should be presented; with so much of his plots and tone hingeing on a signature blend of naturalist speech and crafted drama, only meticulous commitment carries it off, and this cast and crew truly deliver. McCarthy and O’Kelly’s pithy back-and-forth is perfectly paced, as is the choreography and delivery from the full cast throughout. Pybus has the audience in the palm of his hands in the later moments of threat, so much so that the room issue loud collective gasps in all the intended places in the play’s tantalising climax.

Sara Perks’ set presents the working class kitchenette-dining-living room in its entirety, framed with the demolished outer walls of Mag and Maureen’s home. The space is filled with vital minutiae, arrestingly backlit in turn with rainfall, dusk and dawn. Sound Design and Composition from Adam McCready provide a transitional ramp-up evocative of 1950s horror films, as well as TV news bulletins, giving the action a surreal, late-night, hallucinatory edge – apt sustenance for the duality and evasiveness of the central characters’ motivations. Lighting by Jess Addinall sits comfortably in a daylight wash for the majority, adding weight to the few moments in which it subtly shifts into narrow spots to highlight gaunt, yellowed moments of sincere dread.

The lightness of being in the brothers beautifully offsets the ugly rage fuelling the two women; this brilliant blend of actors manipulating all possible nuance from the text so that every pause, every glance, is captivating with feeling. This level of connection and engagement is what one hopes for in live theatre. O’Kelly’s performance is buzzing, constantly teetering; McCarthy’s a masterful observation of predatory possessiveness. Boulton’s Pato is played with such compassion that the mixture of these four brings haunting urgency and recognition to the script’s puckish sense of humour and pain.

If you have to do a Mag and hen-pick it for faults, some seats’ view completely misses some of the play’s pivotal reveals, leaving them to be explained by long-time fans of the text on the journey home; the small but ongoing tragedy of neglected thrust staging everywhere. However, this doesn’t quite undermine the fact that this is a must-see show that will have you on the edge of your seat throughout.