Irving Undead: “a haemorrhage of gaslight” 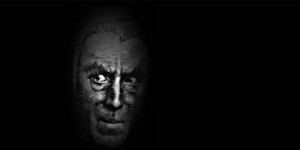 Inspiring Bram Stoker’s Dracula (another of Swanton’s credits, earning him Outstanding Performing Artist in the 2018 York Culture Awards), though never taking up the role (“Dreadful…”), Irving has been resigned to the cobwebs for too long, in Swanton’s gaze, and is about due for resurrection.

Leaning firmly into his signature creature-grotesque style of performance, Swanton plays out this love letter to a great of the past in the most unlikely, obscure storyteller evening one could imagine, flexing his capacity for poignant emotion rarely called for in his own and Irving’s more fantastical guises.

Plagued by tragedy but frequently whipping the audience around with moments of pure hilarity, Swanton’s Irving squints, frowning, across the plush back room of York Medical Society at an intimate crowd. From his creeping, spider-like entrance to his transformed, knowing exit, calling out the lines of the monster he never was, this fireside host is enigmatic to say the least. In Swanton’s own words, “a grotesque paralysis of human crab, semi-exhumed corpse and gut-churning social awkwardness.”

Commencing with an 1898 wax cylinder recording of Irving’s Richard III and dressed as Mathias in The Bells, (by Sylvia Starshine) the performance is a summoning; a ritual of the highest form of worship. Swanton’s script weaves devastating dramatic irony from Irving’s parallels with Peter the Great. This combines with incidental music by Hector Berlioz and beautifully poetic prose by Swanton to form a stirring, complicated portrait.

Larger than life, evasive of death, he lurks and prowls; thrusting his pain into his ‘masks’ and burying his vulnerability deep below the surface. Conversing with a ghostly life mask of his own akin to that of Irving’s, alongside a number of framed portraits of the man himself and some of his near (as they could get) and dear ones, Swanton creates the feeling of a grandparent desperate to share their stories before they fade, though also infused with a sense of his own prestige and the privilege of his audience.

“…it was such a concentrated essence of love for that to which he had devoted his soul that it became positively terrifying,” Swanton quotes of Edward Gordon Craig in his director’s note. The blinding, hypnotic ‘abnormality’ that was Irving translates palpably in the helpless fidelity of his followers; Stoker, the Nells, the Florences.

Full of biographical anecdotes, historical odes to and recreations of Irving’s performances, and dedicated ponderings, Irving Undead makes for an intriguing, moving and remarkable piece of theatre. Go for the tales, stay for the unbreakable bond you will form with an indomitable creature of the night.