The Be All And End All: What would you sacrifice? 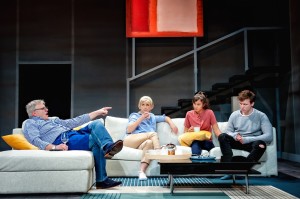 Jonathan Lewis’s new modern domestic drama poses the question, “Where would you draw the line?”, putting patriarch Mark (Lewis himself) in temptation’s path when it comes to a critical moment in his son Tom’s (Matt Whitchurch) education. This middle-class show-home family of established and prospective politicians debates and philosophises like lawyers sparring before court; the smug elite flexing their wits for pleasure as well as for business – indeed, there is little distinction between the two and it is clear which is their priority.

Surgeon’s humour reigns in this wealthy household of enforced ambition. Bravado exudes from all members while intimate details are tossed about carelessly, each taking it upon themselves to out others’ struggles or flaws in various moments. Big issues are thrown up with irreverence and subsequently forgotten. Sensitivity is for the weak; nihilism is realism. Only a powerful family safe in its comfort zone behind closed doors could ride this tone befitting a focus on the bigger picture, the future, the goal. Or can they?

Wife Charlotte’s (Imogen Stubbs) solo journey through the aftermath of surviving cancer is just one fraying thread in their tapestry. Robyn Cara as Tom’s girlfriend Frida is the perfect political protégé, dutifully reciting memorised history and learned opinions, keen to prove herself to the board of older white men holding the key to her future, even when meeting their expectations diminishes her own values. The question of her having had an affair with Mark is another subtext proffered and then left unaddressed.

The veneer of perfection descends into flailing carnage soon enough, the repressed discomforts of the tightly-wound dynamic surfacing like poorly-mixed punch, complete with animalistic roars. Competently portrayed, the family illustrates the dangers of numbing oneself as a coping method, ultimately resulting in more damage than could have been done by being honest in the first instance.

The facts driving the narrative are somewhat cartoonish; Mark states that his white son requires two A*s to get into Politics at Cambridge, while his non-white girlfriend needs only one because she ‘ticks a box’, emphasising the ridiculous nature of the business that the education system has become, fed by numbers and ignoring individual attributes.

Mark’s bull-headed hunger for success all but drives his self-built empire into the ground, though sadly only in this private realm. If you’re looking for some Faustian comeuppance for this painfully recognisable corrupt self-server, you’ll leave disappointed, if not baffled by an abrupt change of tone for the finale, which seems to belong to a different story entirely.

Perhaps most troubling is Tom’s reaction to his father’s violence. We are not reassured that he wants to leave this life behind. Not only are we left with the pertinent sour vision of history repeating itself through misguided parenting, but Tom appears ready to swallow his significant personal hardships even without a cause, sacrificing any hope of a sustainable life. The obvious message implied by the title is its common context, “It’s not the be all and end all”, but sadly it seems it will be in his case.

Catch the show in its premiere run at York Theatre Royal until 19th May. Tickets available here.