Monogamy: A Portrait of the Grand and the Delicate 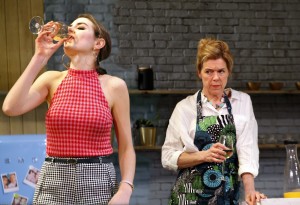 York Theatre Royal’s proscenium arch becomes a cross-section of TV chef Caroline’s (the West End’s Janie Dee) show-home kitchen: a faux-Swedish minimalist Pinterest fantasy of muted teal glossy tiles and pine with a modest botanic garnish and a family dinner table modest enough to tell an on-screen story that will resonate with the wider audience. But it doesn’t take long to make a mess on these counters.

Monogamy is one of our longest-coveted narratives. We romanticise it, we fail it, we initiate the inevitable Armageddon of our fragile relationships. And not one character in this strange, captivating play escapes this vicious cycle of poorly managed disillusions.

Torben Betts’ new show is in its premier performances before winging its way to London, where it is sure to divide the room many times over. Indeed, some of its York audience rumble with laughter throughout while others up and leave at various points. Billed as a comedy, the teetering, crackling script serves jaggedly on-the-nose confessions alongside bursts of absurdity that tip it into a mixture of genres including black comedy, pot-boiler thriller and Greek tragedy. Thunder rolls punctuate jittery arguments. It gets under your skin and vibrates.

The intimate hurts spill more and more generously throughout the real-time one-night action, as the play grapples with our evolving relationships with privacy and agency. Betts considers our continuing fidelitous dereliction, that we frequently opt for self-destruction, spreading ourselves more and more thinly over whatever surfaces present themselves. The dialogue itself can barely stick to one thread, egos interrupting and filibustering each other constantly in their desperate bids for attention.

The invasion of cameras into one’s personal life are arguably enough to put a strain on any kind of fragility, but Caroline’s fierce strain of it practically hunts out her climactic collapse. The addition of Eastenders’ Charlie Brooks as the frenetic Sally is exactly the opening of the oven door that we are waiting for by the time we reach our salivating twilight. The religion that has hung over Caroline as a point of derision throughout the play is suddenly gorged and spewed forth in a minute-binge of empowerment and release, and we are sent out into the night wondering what just happened.

Also featuring Genevieve Gaunt (Harry Potter), Jack Sandle (The Tudors), Jack Archer (Quaint Honour) and Patrick Ryecart (The Crown). This is a show that will get you talking.