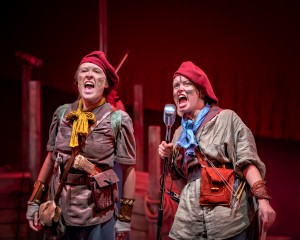 If you can stow away the overwhelming impression of naïve colonial glorification and privilege at the beginning of the show, your evening will fare the better for it. While our small island floats on dark political waters, this production chooses to return to a nostalgic escapism in the swashbuckling adventure of the Swallows & Amazons. While the references to “barbarians” and the intention of claiming and civilising new land are far from comfortable, the energy and emotion brought out through the songs ease these tensions and expand on the character infusing John (Alex Wingfield), Susan (Laura Soper), Titty (Hannah Khogali) and Roger (William Pennington).

The incredibly skilled cast of actor-musicians is completed by Anne-Marie Piazza as Nancy, Rachel Hammond as Peggy, Ellen Chivers as Mother and Ed Thorpe as Mr Jackson and Policeman, not to mention Buckeridge himself as the ostensibly intimidating Uncle Jim (better known as Captain Flint). Designer Katie Sykes’ set creates the perfect larger-than-life version of the kind of lakescapes found on the walls of British holiday cottages, immersing us in the imaginative abandon of the children’s summer. Puppets for Peas also add eerie beauty to the show with cormorants and parrots full of vim and wonder.

Wingfield gives a powerful, precise performance as John, especially with solo number Navy Stroke, a siren song to summon his courage as the eldest son. Laura Soper gives an expert turn as Susan, taking on the thankless role of mother in the adults’ absence but making her own opportunities for fun in a flapper-jazz style Let’s Make The Best Of It. Piazza and Hammond provide riotous laughter as the bloodthirsty Amazons, and Buckeridge and Thorpe hold court wonderfully as omnipresent personalities, transitioning deftly from nurturing musical guardians of the space to humble facilitators of the children’s fantasy.

Set sail for the great indoors and shelter from this stormy weather.