Rosalie Cunningham and Gu-Ru: Psychedelic rock of the future 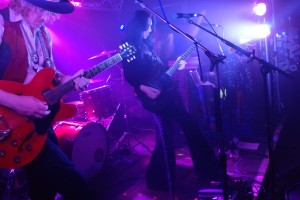 Rosalie Cunningham at The Fulford Arms.

On a summer’s day when the interior York’s beloved grassroots rock venue, The Fulford Arms, was reaching the temperature of a thousand suns, even hotter tunes ranging from dreamy to dark by headliner Rosalie Cunningham and support act Gu-Ru made the perfect accompaniment.

Rosalie Cunningham already has a strong following on the rock scene, mostly as the founding member of Purson. Although Purson have now disbanded, Rosalie has taken the chance to shine as a solo artist. Her York show was on the day she released her debut solo album.

Gu-Ru are a prog-rock three-piece from Leicester.

Gu-Ru are a trio of rising prog-rock stars from Leicester, who opened the night. Their songs range from experimental and atmospheric to out-and-out catchy. Malcolm’s powerful drums add a character all their own while providing that all-important rhythm, Naomi’s flute-playing adds a charming and unexpected edge to the music, while her vocals harmonise in an intriguing and haunting way with Lee’s, who delivers his melodic message from a pulpit of keyboards.

Each member of Gu-Ru brings something unique to the act, and each is as fun to watch as the next. And it’s both exciting and refreshing to see a band that seems to genuinely enjoy their music. They’re the kind of support act that warms up the night well but are tough to follow up.

Having said that, Lee followed himself up, in a sense, as he took to the keys again for Rosalie and her backing troupe of musicians. Rosalie’s sound is much more raw, harking back to the old school sounds of 70s rock but with an added twinge of darkness and smooth vocals. She has a calm, cool, yet commanding stage presence, holding the entire audience in the palm of her hands.

In a single song, Rosalie may move you with an enviable vocal range and wow you with a technical guitar solo while knowing every movement to make to keep you watching her. She’ll reel in Purson fans with the former band’s songs, and hype you up with her new material. The set offers sounds of joy, sadness and a little bit of darkness.

While influences from the 70s can be heard in these psychedelic rock outfits, every musician on stage that night has learned from the sounds and elements from the decades since, showcasing an enticing evolution of the genre. With the skill and creativity of Rosalie Cunningham and Gu-Ru, this style of music is in safe hands.