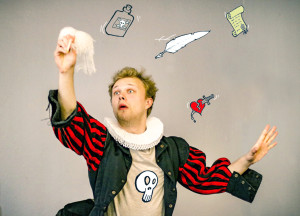 Leeds-based company Wrongsemble turn their trademark aesthetic panache to the imagined creative awakening of William Shakespeare, on a pop-up stage in the groundlings pit of Shakespeare’s Rose Theatre in York. The formidable collective of Director Elvi Piper, Designer Antony Jones, Musical Director Rosie Fox and Costumier Julie Ashworth makes for another rich, eye-catching set piece and, for the most part, the story holds the attention of their dutiful audience, who have ventured out despite the ominously changeable weather.

There are several obstacles to the show hitting its exact mark here: at £14 per groundling ticket the show has priced many families out of attending, even moreso than the four main house plays advertised at £13.75 (with much higher production costs and thrice the running time) – evident in the sparse audience who do make it along; some heinous gender stereotyping is incredibly off-putting for those introducing their four-year-olds (the intended audience) to the magic of theatre; the language and pacing vary in their successful engagement of the very mixed ages in the audience. Running at sixty minutes, it’s just too long for wriggly smalls.

Beginning as ‘themselves’, the actors assemble one at a time, making out that they have been caught unawares by the early start time – “Apparently it’s always ten-thirty…” This, the first of many jokes and references that reach the adults watching better than the children. Establishing the supposed drudgery of Shakespeare’s childhood (“To get up or not to get up”, he huffs, “To wash or not to wash”) with mechanical choreography that’s interrupted none too soon, we are presented with some pretty grating images of men and women’s roles in the home, even with the freedom of historical accuracy discarded for comedic references to cars. Given the show’s successful previous run, it’s hard to believe there was never pause for thought over the frazzled mother “washing up religiously”, the deep-voiced father driving off to work, and the wittering sisters arguing in shrill whines. It certainly isn’t questioned and, even if it had been, seems a dangerous feature to introduce and reinforce with such rehearsed gusto into a theatrical experience aimed at such young, impressionable minds, many of whom will be seeing this structure described for the first time. Barty Butter (Harri Pitches) makes a fun Bottom-in-the-writing as a fictional Shakespeare-era diva demanding all the roles, although this does mean more sidelining of the two female cast members once again to the roles of facilitators for a boisterous male protagonist.

That said, the performers are excellent and carry the hour with charm, using the depth of the grand venue to broaden the story at choice moments. Multi-roling with ease and providing aptly Elizabethan-style live musical accompaniment from a variety of instruments on stage, Billy (Pitches) and his two narrator-sidekicks (Victoria Brazier and Alyce Liburd) are a tight trio who make their audience feel incredibly welcome. The action certainly has moments that capture the hearts of the smalls on our picnic blanket with expert clowning, resourceful prop play and some rousing songs; the tune and harmonies of the titular Wonderboy being a particular highlight. Though the script may lose us somewhere in the second act as they digress for a while too long in recreating the writing process of Romeo and Juliet, the troupe brings us right back to the stuff we love towards the end. Handing out soft-toy fruit and veg for us to hurl at Butter when called upon is a particularly nice touch, and no artistic parental figure could scoff at an ending comprised of a sonnet-form ode to Shakespeare’s plays and the galvanising closing line, “Create until you’re blue!”