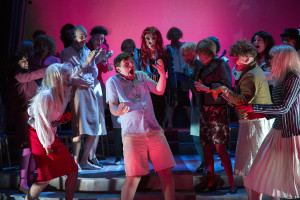 Bruno Jenkins and The Witches of England. (Photo by James Drury, with permission from York Theatre Royal)

York Theatre Royal Youth Theatre’s performance of The Witches was a nostalgic mix of comedy, horror and pantomime tropes.

Those who grew up with Roald Dahl’s classic tale of terror, or indeed the 1990 film adaptation, would have felt right at home with this production. Incidentally, so would audiences of Sherlock Holmes, as the action plays out among the same Gothic pillared halls and life-size portrait frames. There were the usual pantomime tricks in the form of witches mingling with the audience before and during the show, as well as audience assistance with Boy’s great mouse circus.

The witches’ assembly and The Plan reveal are particularly terrifying; the stage amok with chasing, chanting, cackling, scratching monsters in hunt mode.

In all, The Witches was a spell-binding display of creativity, style and feeling.