Set Fire To The Stars writer Celyn Jones does Q&A 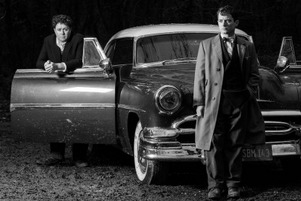 Elijah Wood and Celyn Jones take up the lead roles in Set Fire to the Stars.

Andy Goddard’s big screen directoral debut, Set Fire to the Stars, is coming to the City Screen. Viewers will also be given the opportunity to have their questions answered by writer and actor Celyn Jones and producer Andy Evans of Mad as Birds in a Q&A session.

As well as co-writing the script with Goddard, Jones plays the real life Welsh poet Dylan Thomas alongside Elijah Wood, who stars as the American poet and critic John Malcolm Brinnin, at the time an aspiring poet and admirer of Thomas. The film, based on factual events, tells the story of the heavy-drinking poet’s first visit to the United States, and Brinnin’s attempt to befriend and help him.

Goddard has previously worked on television shows, including Downton Abbey, Torchwood and Doctor Who, among others. Set Fire to the Stars, shot in arthouse monochrome and shown at last year’s Edinburgh Film Festival, is his first feature length film.

It is also the second film about Thomas’ life to be produced in recent years, the first being 2008’s The Edge of Love. While the earlier film focussed on the women in his life, Stars promises to offer a different approach to its subject, and is set just three years before the poet’s early death, at the height of his alcoholism and notoriety.

The film is showing on the 12th and 20th January, with the Q&A session happening after the screenings on the 12th. To book tickets, visit the Picturehouses website.