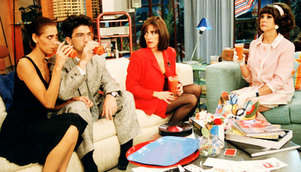 Women on the Verge of a Nervous Breakdown is coming to City Screen.

Pedro Almodóvar’s 1988 classic black comedy, Women on the Verge of a Nervous Breakdown will be playing at the City Screen, following a live Q&A via satellite.

The award-winning film follows the lives and relationships of a group of women in Madrid, with a cast of characters whose paths continuously intertwine as the plot grows increasingly complex.

Since its release more than 25 years ago, the film has been highly acclaimed by critics. It was the film that first won Almodóvar international recognition.

Almodóvar is known by foreign film fans as the writer and director of several successful works including Talk to Her, Bad Education, Volver and The Skin I Live In. His most recent film was 2013’s I’m So Excited, a comedy set on a plane that is unable to land, serving as a political allegory that made scathing judgments about corruption in the director’s native Spain. His films frequently revisit themes of family and personal identity, and are known for their quirky dark humour.

Bartlett Sher has previously worked on several other theatrical productions, including a revival of South Pacific, for which he won two awards. The musical adaptation of Women on the Verge of a Nervous Breakdown is currently showing previews in London and will be opening on the 12th January.

The Q&A will be broadcast live via satellite from the Playhouse Theatre in London, following a performance of the musical. It will precede the screening on the 10th January at 10:30pm, and will be exclusive to just a few Picturehouse cinemas.

If you want to submit a question before you go, you can simply tweet @womenvergeuk and @picturehouses. Tickets are available from the Picturehouse website.