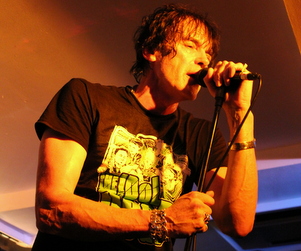 Old school punk will never quite die. Thus was proved when Richie Ramone – as in the legendary Ramones drummer and his band – played at The Basement, with support from The Idol Dead and Modern Day Dukes.

It was a night where tradtional punk from 1980s New York was joined by Yorkshire new school punk bands. The line up was well matched with each act complimenting the next. It’s easy to see why The Idol Dead were great for Richie Ramone‘s tour and why Modern Day Dukes made an ideal addition in York.

The Basement‘s small size was strangely fitting for the show. By nature, punk is very in-your-face. With the audience unable to get much distance from the stage, this gig literally couldn’t have been much more in-your-face. The Basement is an underrated setting for loud and brash bands. 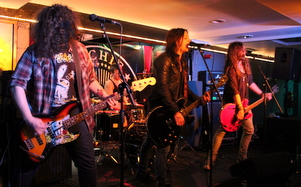 Kicking off the night was the very tongue-in-cheek Modern Day Dukes. They’re like a punkier version of what Bill and Ted probably had in mind when they dreamt up Wyld Stallyns. Music is reminiscent of fun, 80s punk and, as it was the season for it, they even played their own Christmas tune.

Next up was The Idol Dead, with a more horror punk edge. With the last act having got the crowd hyped up a bit, plus the fact that The Idol Dead had brought in a number of their own fans – affectionately known as The Idol Army – people really got into their more modern and well-polished blend of punk. 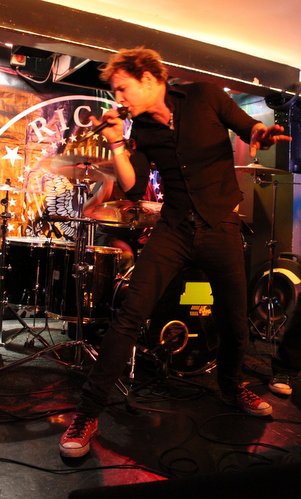 Polly Phluid of The Idol Dead

This excitement eventually culminated in organised chanting of “I-D-O-L D-E-A-D”. As an experiment, the band also got to replace “D-E-A-D” with “Ri-chie Ra-mone”, which unexpectedly resulted in Richie being summoned from backstage briefly and surprising the crowd and band alike.

The focus point of the night, of course, was Richie Ramone. This man is one of a rare breed of drummers that can command the attention of the room, even though his kind are traditionally pushed to the back of the stage. Of course, he has the advantage that he’s the centrepiece in this act and is in charge of vocals.

Joining him on stage were Clare Misstake and Alex Kane of Anti-Product, both of whom had the exact style and stage-presence you need for this kind of show, as well as the slightly more subdued Ben Reagan who was able to take up drums and let Richie take centre stage.

People wanted a show reminiscent of The Ramones and that’s what they got, with classic tracks like Somebody Put Something In My Drink and Blitzkreig Bop. Yet let’s not forget the tour was about Richie’s new album, Entitled, so the crowd got dancing to some tracks from there. A few members of the audience even got to walk away having had a hug from Richie himself mid-set. No doubt, a nice little thing to look back on while they waited for the ringing in their ears to wear off.