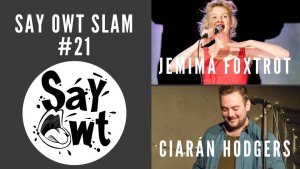 It seems like a strange concept – competitive poetry. But as Say Owt demonstrate, with a capacity audience for their twenty-first, coming-of-age, Slam – it is a hugely popular one. The company comprises Henry Raby and Stu Freestone, who have burgeoned from humble beginnings into York’s prominent purveyors and promoters of performance poetry and Spoken Word. Not that they don’t still flaunt that humble start; their signature backdrop, a banner home-made from an old single bed sheet, proudly holds the signatures of all the poets that have performed in its shadow.

Ten poets compete by presenting just three minutes of their work and judges, picked from the audience, give them a score out of ten. The four highest scorers then compete again and a winner is chosen. To put the judges and audience at ease a ‘sacrificial poet’ starts off the proceedings, and tonight’s lamb to the slaughter was doyen of the local arts scene, Hannah Davies, with her aptly chosen Words.

Our hosts for the evening are Raby (York’s foremost Anarchist Nerd Punk Poet) and Freestone, who with lovable charm seems intent on redefining the very idea of competence. They keep the evening flowing and set the tone, which is light, welcoming and inclusive. Associate Artist Dave Jarman adds his own anarchy to the evening with a wickedly funny and irreverent use of the sound desk and a playlist from hell.

The competitors are a top notch bunch with a wide variety of styles and subjects: Kit Rayne opens with a wonderful memory poem perfectly catching the tone of late night/early morning reminiscence; Matt Sharlock presents a bitingly funny poem of a newly single man who struggles against his friends’ attempts to set him up on a date; Ros Ballinger delivers a pithy found poem culled from actual Tinder profile accounts, and Amy Kinsman’s moving poem about a gay woman falling in love with a straight girl hit all the buttons.

An idea of the breadth of talent on show is exemplified by the differing styles of the winner and runner-up. Bristolian Sam Grudgings comes second with performances like incendiary devices lobbed into The Basement; quick-fire, controlled mania which belies superb craftsmanship in pieces that are both hard hitting and darkly funny. Winner Susie McComb offers a gentler, if no less affecting, brace of poems, with Poet being a wonderfully tongue-in-cheek new verse for Nicki Minaj’s Monster, and an unintentional riposte to Davies in Unspoken Words, about the very process of finding your poetic voice.

The competitive element is only half of the Slam, however, and it is testament to the pulling power of Say Owt that in its twenty-one iterations they have enticed some of the biggest names on the spoken word circuit to perform in York. Tonight is no exception, with two guest slots from a pair of amazing poets. First up is Irishman Ciarán Hodgers. His brilliant How to be an Irish Immigrant dazzles, subverting a humorous tone into something darker; Drogheda is a paean to his home town, simultaneously idolising and mocking it as only a true native is wont or entitled to do, and a truly stunning epitaph for his Grandfather is found in New Seeds.

Second headliner Jemima Foxtrot is a firm favourite of the audience and you can feel their warmth for her. She has an effervescence that draws an audience in – reminding one of Maxine Peake – with her charm and wit. Her poem, All Damn Day speaks to everyone, cataloguing the minutia everyday life. Particularly affecting is her love poem to Bob Dylan, hilarious when she is at pains to point out that is the Freewheelin’ Bob Dylan-era Bob she loves and definitely not the Bob of now – a fabulously harsh and cutting show of emotion.

It is my guess that Say Owt will continue on, and it will soon be time to upgrade to kingsize bed sheet.