In Other Words: theatre review 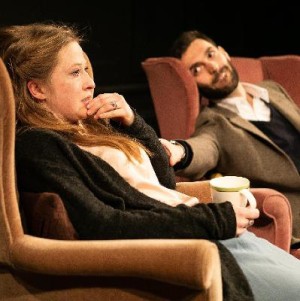 In the black box studio tucked away under the stairs at York Theatre Royal, Arthur and Jane are already waiting for the audience to arrive, lolling on the sofa and quietly laughing at inside jokes. Written by Matthew Seagar and directed by Paul Brotherstone, In Other Words is achingly familiar. The play combines the little-understood late effects of Alzheimer’s disease with flashbacks to forgetting the milk and dancing in the living room. Memories and reality blend together for Arthur (Seagar) and Jane (Angela Hardie) through shifting light and fluid physicality as they narrate and reflect on their love story together. The pair bring this powerful story to life with precision and heart.

In Other Words was produced in association with non-profit organisations The Alzheimer’s Society, Bath & NE Somerset Dementia Action Alliance and Playlist For Life. The latter produces personal playlists for those with Alzheimer’s disease and dementia to help bring back memories, reduce emotional strain and strengthen relationships. Frank Sinatra’s music is the backbone of the production, both Arthur’s link to his own self and what ties the show together. “I’ll never be able to listen to Fly Me To The Moon again,” one audience member whispers during the final bows, but I disagree.

The play celebrates the power of music to permeate the everyday and magnify the extraordinary. With a simple set – just two armchairs, a lamp and two wine glasses to one side – there are few distractions. Music, a ticking clock or the absence of sound altogether forms the backdrop to every scene. We see Arthur and Jane fall in love as they dance to Fly Me To The Moon under a hazy purple glow, the harsh shadows and stark blue light of the doctor’s surgery. The lamp flickers and the clock ticks as Arthur slips further into his condition, as Jane desperately plays Sinatra as she sees her fear of Arthur forgetting her come true. Off the Middle Theatre Company prove themselves to masters of sound and light in such a simple yet intricate production.

Simple is the wrong word to describe the cast’s performances, however. While suddenly breaking the fourth wall mid-scene initially seems quite jarring as a decision, it is also the perfect way to highlight the two actors’ talents. Seagar bursts forward in this multi-layered added reality, wondering aloud, “Was it really that bad?” as the two characters remember the first time they met, before curling back into Arthur as he is gripped by Alzheimer’s. Switching selves and tone in fractions of seconds, physicality is the crux of Seagar’s storytelling: a jokey striptease scene from the characters’ past suddenly becomes a terrifying ordeal for Jane in the present as Arthur wanders in from the cold, half-dressed. Creating a sense of time and place alongside a flurry of emotion is never too difficult for Seagar and Hardie to master.

“I hate this bit,” sighs Jane to the audience as we hurtle down a seemingly inevitable path. Talking to the audience directly, Hardie captures Jane’s dogged strength and complexities with such depth and precision that the story becomes more than an already tragic and complex study of a debilitating illness, to an intimate exploration of resilience and what it means to love. Off the Middle’s production is, like its characters, at once versatile and steadfast. The audience laugh, cry and watch in stunned silence through the decades depicted, and the message throughout remains the same: love may not conquer all, but it can at least try.

In Other Words is, in other words, simply beautiful.