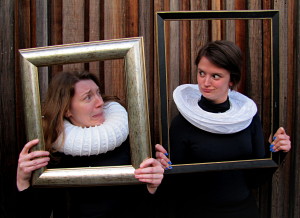 Jess Murray and Claire Morley, Fools One and Three

Never to be outdone in its boastful theatre per square mileage, York hosts the show in its brand new, second pop-up Shakespeare venue, The Dogrose, emerging weed-like at 14 Pavement, inbetween the Golden Fleece and York Gin, another fresh York-born enterprise.

Tightly plotted and loosely knit, The Alchemist sees con-artists Subtle, Dol and Face take over a house and convince their victims that they can get rich quick. Cue a stream of lawyers, missionaries, toffs and tarts with big ambitions – entering with big dreams and leaving with empty wallets. Nobody gets out with their cash or dignity intact – with the sole exception of the landlord, who returns home at the worst possible moment.

Director and Bronzehead founder Tom Straszewski says of the play: “Coleridge said it was one of the three best plots in literature. As a farce it’s up there with Fawlty Towers – a place where everybody’s losing their mind over the smallest chance to strike it rich. We’ve drawn on Renaissance traditions of Commedia dell’arte masks, and on modern clowning, to really bring out the slapstick behind the words.”

“At the same time there are little moments of sympathy. I think we’ve all had that dream of an easy life, but it’s like any scam – whether an e-mail promising an inheritance, financial bubbles, political dreams – all just need a little more of your money to pay off… We’ve found a perfect space for it at The Dogrose – an abandoned attic, full of picture frames and junk – the base lead we hope to turn into theatrical gold.”

Because heading an independent theatre company and raising a human aren’t full-time enough pastimes, Straszewski has also helped curate the programme of events at the Dogrose. “York’s had a huge success with pop-up venues like the The Fleeting Arms and The Rose Theatre by Clifford’s Tower. The Dogrose is a cheeky way of following in that tradition.”

Other events at the Dogrose include the life of Boris Johnson told through Shakespeare in Boris Rex; a re-imagining of sonnets set to music in The Buds of May Be; University of York students’ puppetry-led The Winter’s Tale; Mark Carey’s Into the Breach, in which Henry V battles his way through a village hall’s am-dram group; local artist Miss Trout creates A Midsummer Night’s Dream for pre-schoolers, full of glitter and glamour.

The line-up is completed by the world premiere of York actor Mark Burghagen’s The Sacred King, a short film documenting Richard II’s death at Pontefract Castle, filmed on location. Finishing the festival with a bang is Battle of the Bard, a knock-out tournament of all Shakespeare’s plays.

Tickets for Dogrose events can be booked via York Theatre Royal box office or bought on the door. Many are free or pay-what-you-like. Visit yorktheatreroyal.co.uk for details.

Bronzehead Theatre was established in 2013 to produce site-specific theatre in York and further afield. Past productions include Richard II in gardens across Yorkshire; Henry IV: A Pub Wake; a sell-out run of Dracula; and a theatrical travelogue of Dickens and Collins’ The Lazy Tour. Find more about the company here.

The Alchemist launches the festival at The Dogrose and runs from Saturday 11th – Wednesday 15th May, at 8pm nightly on Saturday, Monday, Tuesday and Wednesday, and 3pm on Sunday. Tickets are available from York Theatre Royal here, or on the door, subject to availability.