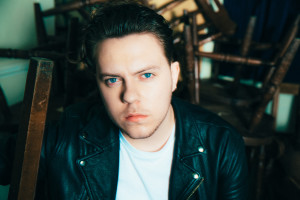 Saint Raymond has rocketed to fame in the last year. From dive bar gigs with barely more than double figures to playing at the O2 in Manchester, he has seen those numbers rise to the hundreds in an incredibly short time. Despite such a swift ascension, 20-year-old Callum Burrows has maintained a charmingly humble air that only endeared him more to the voracious crowd that awaited him at The Duchess.

This was only the third date in a massive nationwide tour but any signs of early tour jitters were notably absent as Raymond and his solid support barrelled through their sets with confident and welcoming ease.

The evocative vocals of 21-year-old Shannon Saunders kicked off proceedings and set a great benchmark for the remainder of the evening. Together with a keyboardist and soundboard, her Sia-like vocals were joined with a heavy dance backing to create a haunting yet head bopping effect. She ended her all too short set with her new single and left to much applause.

23-year-old Louis Berry followed Shannon up and did so with a resounding crash as he and his band blazed into their set that had a cocksure confidence that was impossible to resist. The set was a rambunctious cocktail of indie punk blasts, desperado tinged rock hoedowns and bluegrass. There was even the suggestion of ballads as some tracks would start pleasingly slow and soft before roaring into inescapable action.

Berry engaged humorously with the crowd, playing off his scouse heritage with self-mocking pride. By the time he left the stage, the crowd were well and truly ready for the main event after two incredibly strong support acts.

Raymond began out of darkness, a wall of guitar sounds heralding his arrival. Just as the crowd went wild, the lights went up and Raymond leapt to the mic and charged into the anthemic Letting Go. The crowd ate it up, chanting and singing along with the sprightly, gangly haired youth as he careened through the first few pop heavy tracks.

Following a few simple thank yous and cheers after each track, Burrows got into a more extended dialogue with the audience, alternatively asking them to sing along with him, as he had a poorly voice, or thank everyone for getting his record into the top 10.

The beginning of the set leaned more heavily to the anthemic indie pop fusion he’s known for but the show was not without variety. The show slowed things up in the mid-section for some hand waving diversions in the shape of a solo acoustic performance of As We Are Now and a wonderfully surprising return from Shannon Saunders for the track Movie in Mind, which they co-wrote.

While the set seemed to favour newer tracks, there was still a smattering of the old in there as well as a delightful cover of Major Lazer’s Lean On.

As he closed in on the end and the set formally ended, rapturous applause inevitably brought Raymond back for a rousing encore.

Young Blood is an apt name for the album and the talent who played tonight – all did so with far more ability than their years would suggest. If this is the voice of tomorrow, it’s a sound well worth hearing.