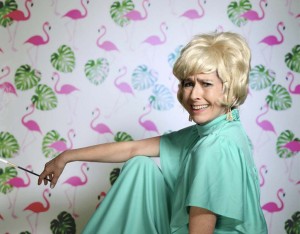 Writer-performer Caroline Burns Cooke’s meticulous sixty-minute one-woman show investigates the life and work of the actress Yootha Joyce, most famous for her role as Mildred in seventies sitcom Man About The House. Despite a comparatively short and late-blooming career, Joyce’s prolific contribution to television and her untimely death had a great impact on many people.

Burns Cooke commits to creating theatre exploring the extremes of humanity, from a female perspective. In the liminal grey of a floating studio lined with steel girders, she enters the space in seventies pastel mint and blancmange, recreating the renaissance-worthy aesthetic of a vintage pulp film poster come to life. She presents a haunted time capsule of frozen memories rubbed back to life, snapping between ages, songs and conversations in Joyce’s life; some landmark, some seemingly happenstance, all heartfelt and carried with the delicacy of a broken bird being laid to rest.

Shedding her shoes and shawl to the audience’s care, Joyce walks us through some of her early experiences in theatre, including Joan Littlewood’s cuttingly harsh notes and an inherited disdain for Michael Caine. She interrupts these recountings with foul-mouthed commentary, toeing the lovey line between heightened glamour and dilapidated obscenity, always both vying for control over her fragile frame. Burns Cooke’s physicality is beautifully observed; a careful painting of fraught hurt, fearsome anger and pulsing vulnerability. Experiencing doubt and rejection from childhood to the altar, she scrambles her way through to her goals. One scene she revisits provides a startling depiction of the bleak other-worldliness of addiction and mental illness; a light-hearted address to an imaginary younger woman on her own desirability, offering casually to borrow the woman’s husband and show him a thing or two, turns on a hairpin into a dark-of-the-night confrontation one might only have with a mirror. “Has anyone ever clawed your skin off?” she asks, pulling at her own cheek. She intends to do damage.

Though many of Joyce’s accolades are lost on younger audience members, and some of her social views and personal traits somewhat abrasive, the script and performance create a powerful aura of this star of yore. Burns Cooke invokes the heavens in an upward-reaching motif that mixes grace with pleading throughout the piece, almost pulling you with her through her deep, introspective breaths into a meditative state. Joyce notes her tenure as having burned too brightly, and perhaps too close to the sun. The effect is transcendant; yearning. It is touching that any artist would feel moved to pay this homage to another with so much care and detail, and one hopes that Burns Cooke may one day receive the same treatment.

Testament of Yootha won Best Play at Morceambe Fringe days before being presented at The Arts Barge, York on the 28th July 2019 as part of the Great Yorkshire Fringe. The show continues on to Edinburgh this August.