Roll up for the Vagabond Bazaar 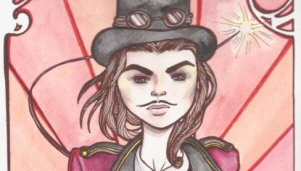 The ringleader, drawn by Laura May. He's on the poster for the Vagabond Bazaar (image courtesy of Laura May)

Vagabond Bazaar won’t just be your ordinary arts and crafts fair. Get ready for an old school gypsy carnival of the weird and wonderful.

The bazaar will feature traders both from York and further afield as well as burlesque acts, magicians, a palm reader, a spirit medium, a story teller, a circus performer and gypsy style live music.

There will also be a book signing by Anne M Stephenson as she launches her new children’s book, Basil and the Flappy Thing.

Laura May, owner of Rag and Bone and curator of the Vagabond Bazaar, said “I originally wanted just a run of the mill craft fair but I’m obsessed with Romany gypsy, vaudevillian circus style and culture so I really wanted an old style carnival.”

She’s an experienced craft fair curator as she previously helped put together the White Night Open Market in Brighton. This was set up as part of Brighton’s White Night celebration for the clocks going back.

But there’s some acts that Laura May is still seeking to complete the Vagabond Bazaar. “I’m really keen to hear from anyone willing to put together a make-shift freak show or flea circus” she said.

Stalls to look out for

The real stars of this kind of fair are the artists. So here’s a little info on just a few of the traders selling their wares at the Vagabond Bazaar.

Laura May will be hosting her own Rag and Bone stall, which, if you didn’t read our feature, sells Art Nouveau, Pre-Raphaelite and slightly manga inspired paintings, prints, graphic novels and jewellery.

Another trader, Pauline Carney, will be selling her mixed media pictures, portraits and collages. She’ll also be telling futures with her palm reading.

If you get inspired by the style of the burlesque acts then you can try All Girls Are Magpies for jewellery and accessories as well as art. This stall will be travelling up from Derby to sell some handmade wares.

And there’s loads more crafty stalls to look forward to.

But there’s still a little space left for more carnival acts and stalls. “We want it brimming!” said Laura May. Anyone wanting to get involved should contact her at [email protected]

The Vagabond Bazaar will be at the Melbourne Centre on Fishergate from September 1 from 11am.

2 Responses to Roll up for the Vagabond Bazaar