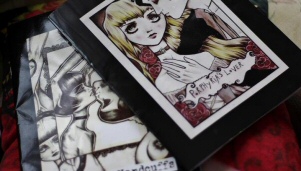 Rag and Bone draws on history and literature to create Laura May’s subjects, mixing inspiration from the Pre-Raphaelites, Art Nouveau and just a hint of manga.

Laura May first made her mark as a serious artist in Brighton. “I started to take art and illustration more seriously as a career when I moved to Brighton in 2008”

“I hadn’t long left school after deciding University wasn’t the right path for me – instead of studying art I thought I would just go ahead and do it, so I set up a stall in the North Laines of Brighton and ran it up until leaving  in December of 2010,” she said.

‘Throwing a dart into a map’ and landing in York

After leaving Brighton she moved to York, where she changed her brand name to Rag and Bone. She chose the name because it “conjures an image of something which is rough around the edges, tatty and unfinished – that’s definitely my drawing style.”

But before moving, Laura May had only visited York once before, “I have a habit of throwing a dart into a map” she said. 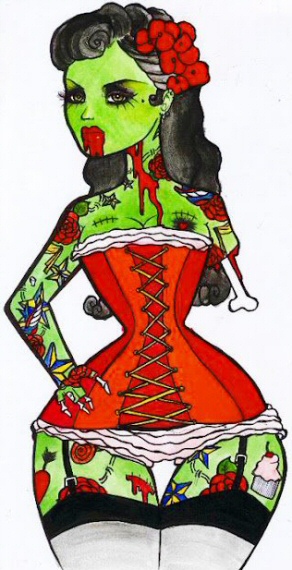 It was York’s history and architecture that she claims drew her to the city, “my surroundings pay a heavy influence on what I do, for instance, I’m currently working on a set of prints based around ‘The 12 Ghosts of York'”.

She was also impressed by the creativity of its locals, “York is quite a saturated place in terms of creative people, they aren’t ten a penny like in Brighton but the ones that are here are very, very good,” she said.

Aside from the stall in Brighton, Rag and Bone has made its mark through online selling.
Laura May says she has “quite a few collectors”, one man in Belgium has bought six of her wood paintings.
She sells much of her work is on Ebay but only when listing is free.

In 2010, Laura May was invited to feature in The Brick Lane Gallery in London.

“I had just left Brighton and I was looking for a project to focus on because I didn’t relocate the stall. Luckily Brick Lane got in touch around that time to ask if I’d like to exhibit for their ‘Haze’ show in May – I bit their hands off,” she said.

She has published two graphic novels. One is entirely her own, titled My Lover in Handcuffs, and the other is an adaptation of Robert Browning’s poem, Porphyria’s Lover.

But unlike most graphic novel writers, Laura May took on a lot more work in making hers as she didn’t use computers. Both graphic novels were completely hand drawn and printed. Even the text.

Selling two books, planning the next

Her graphic novels can be bought from Travelling Man on Goodramgate. Although not on sale in any other shops, Laura May has said she’d like to see My Lover in Handcuffs sold in its setting of Brighton. 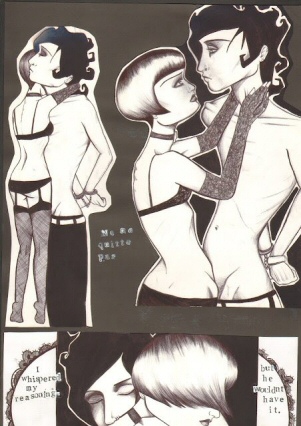 She spoke a little about the next graphic novels she’s got coming up.

One is called Calamity Jack, about “a very clumsy young man who falls down the back of a washing machine and finds himself in Lost Land where all lost things go; time, keys, socks, Little Bo Peep’s sheep – you name it.”

After that, she’s planning what she describes as a “violent” and “gritty” series titled Black Eyed Danny

“I originally wrote Black Eyed Danny as a screenplay when I was 15. I’m desperate to start it as a graphic but at the same time I’m procrastinating as its such a big piece to take on,”

She’s also working on adaptations of The Raven by Edgar Allen Poe and The Lady of Shallot by Lord Alfred Tennyson.

As well as graphic novels, September 1 will see Rag and Bone’s Vagabond Bazaar at the Melbourne Centre on Fishergate, a craft fair come gypsy carnival featuring artists and performers from around York.

So far, Laura May’s got burlesque dancers, a palm reader and folk bands to name a few of the performers that will be there. But she is still looking to book more. “I’m very keen to hear from anyone willing to put together a make-shift “Freak show” or Flea circus,” she said.

So whether it’s prints, graphic novels or even circus, Rag and Bone has a lot more to deliver to art both locally and internationally.