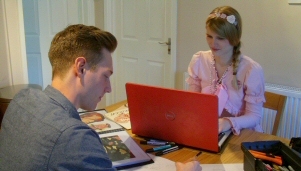 Aram Arratoonian and Livija Dale, their talent for art is what nature gave them.

It’s not often you get a brother and sister who are brilliant in the same field. But Aram Arratoonian and Livija Dale share a gift in graphic design.

Having grown up in York, they chased their ambition through university where they started carving their careers.

Livija graduated from Sunderland University in 2011 before moving to Newcastle for a year to work as an in house designer.

Aram graduated from Huddersfield University this summer and, since then, has been free lancing for companies in and around York.

They got talking about why they both chose to work in design and their take on how to make it in that field.

Q. When did you get into graphic design?

A. (Aram) Graphic design specifically probably wasn’t until 6th form but I have been into design and art for as long as I can remember. It took me until college to decide whether I wanted to do art or graphic design. Art is just about expressing yourself where as with design you are creating for a purpose.

(Livija) Since my Grandma was into art I had always wanted to do something like that. I think it was GCSE level that I started to realise there was a difference between art and design. I started to notice design on packaging and that was one thing that made me think about it.

(A) Yeah I think packaging was the thing that got me into graphic design.

Q. Why do you think you have chosen the same career path?

A. (A) I think the reason we have both come off arty is from influence from my mum and grandma. Everyone in our family can draw very well.

(L) I don’t know why [we chose] the same thing specifically.

We kind of grew up with the same influences and my mum has always had good taste in design, not only in graphic design but design in general like interior design.

(A) We were always encouraged to draw. Like whenever we went to restaurants she would always bring wads of paper and pencils and while the adults were eating we would sit under the table and draw. She always used to expose us to design like taking us to art galleries and stately homes.

(L) Yeah, even though I found it really boring at the time.

(A) Especially as Livija likes Art Nouveau and I like Art Deco and Mum likes both of those so I suppose we have just come from an arty family. It’s just that Livija and I have tilted over to design more than art.

Q. Do you influence each other in your work and ambition?

A. (A) I think when we were younger we did. Now that we don’t live together we don’t get as influenced by each other. But we still ask each other for advice.

(L) I think it’s more that since we grew up together we have a similar kind of out look so on principle our work is kind of similar.

Q. What sort of graphic design do you specialise in?

A. (L) I would say my specialisms are print based and usually design combined with illustration. I have a big interest in editorial and publishing. As far as illustration is concerned it is just something I have always been good at so I just continued with it.

(A) I’m more into the commercial side. I am more into advertising and thinking “this will make it sell well”. I enjoy branding, do quite a lot of branding things. I quite like the idea that my input can help something sell and make money. The reason I like branding companies is I like the idea that they will look so good that everyone will think “this company is amazing”. But I think because I have only just graduated it will be a while before I will find my niche.

Q. How have you built up your graphic design portfolios in terms of the work you’ve done?

A. (L) I kind of have to admit most of mine is still university projects but I try generally to get involved with my hobbies so a lot of lolita related stuff, doll related stuff and doing a lot of things with the local community, certainly in Newcastle, and going to events there and getting involved in that stuff.

(A) Mine’s a mix of university and the free lance I have done. I have done some work through people I met at university, entered competitions, done some work for the NHS, magazine covers for friends I did. For other free lance stuff I started doing logos for Complexity Management and rebranding Haxby Opticians.

(L) It’s really starting out with people you know and expanding it from there. I think it’s good to try and involve your hobbies and just generally not being afraid to ask people if they need any work.

(A) It just constantly brings up the age old question of “should we work for free?”

Q. How much free work do you think an aspiring graphic designer should do?

A. (L) I only really do something for free when it’s not for profit. So where they don’t make any money off it either and it’s just for the community. But I think if it’s something where some one is making a profit I don’t see why the designer should be excluded. I would heavily, heavily discourage any one from working for free. It devalues the industry. I think a lot of people have the perception  that design is something easy. I have had people say to me “yeah, it’s just faffing about on a computer” so I think that working for free is just feeding into that mentality even if people don’t realise it. Also, I agree with a lot of designers who say its bad for both parties because you know when you’re not getting paid you’re not putting as much effort in and I must admit that I put more effort into my paid work than my free work.

Q. What are your future career plans?

A. (A) I don’t want to stay free lance so I want to get a job in a design agency, get to know the ropes and I may set up by myself in about five to ten years time. I really want to get to a bigger city where there’s more of a creative feel, so hopefully London or Manchester. London is top of my list now because after going down for D&AD it just felt totally different from anywhere else.

(L) I’m moving to London shortly and similarly I want to work in a studio or agency preferably but what I really want is to focus on publishing. I would like to continue getting involved in the design community because we do have things going on in Newcastle and I have really enjoyed making things like that get bigger. Now I just need to get in to a bigger city in the UK and do the work there.
(A) It makes such a difference when you are surrounded by creative people. I don’t think I ever really realised that until the last year of university.

Q. Do you think there is a creative feel to York?
A. (A) I would say everywhere has stuff to offer and York definitely has. Because York is so historic it has a totally different type of design compared to, say, Manchester. Because it’s touristy it’s designed to look beautiful but I think to go places in the design world you have got to go to a bigger city. It’s easier to make contacts and there’s more opportunity.

(L) I think there’s some good agencies in York if you look for them. There’s always been arguments about designers leaving the North.
I don’t have any intention of living in London forever. Although it’s good for experience a city like York is more inspirational to me. There has been an increase in design related stuff in York so I think that will continue and hopefully it will.

To see the work they’ve done, check out their websites at www.livijadale.com and www.aramgraphics.com