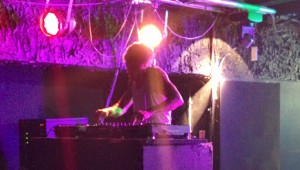 Rob Holliday says he doesn’t consider himself a regular DJ.

He may be famed for his work with the likes of The Prodigy, Gary Numan and Marilyn Manson but Rob Holliday still managed to find time to come down to DJ at The Duchess in York.

Rob has been busy touring as a guitarist with The Prodigy lately and says he does not really class himself as a DJ. He is also in the midst of working on some new material with his band Sulpher. Yet he made the date at The Duchess his only DJ set of the year.

Ahead of his set, he also made time to talk to Arts York about gigs, playing in the North, working with The Prodigy and what he’s got planned for the future.

Q: What made you decide to do this gig in York?

A: Well my good friend Dom at Soundsphere magazine had mentioned he was going to be putting on a night in York a while back with a few cool bands and DJs. He asked if I was available to come throw on some tunes, I said hell yeah!

Q: Why have you made this your only DJ gig of the year?

A: I only occasionally DJ at the odd event really. I do things that I think are cool and things that my friends put on. The most recent was a good friend of mine, Jochen, who runs the Wildstyle Tattoo conventions throughout Austria. Plus with The Prodigy touring schedule it’s hard to find the time to do anything else really.

Q: As you have experience playing to festival-sized crowds, how does playing to smaller audiences, like at the Duchess in York, compare?

A: It’s all the same really, obviously it’s great playing in a well known band in front of thousands of fans, but you know a nice sweaty room playing blasting tunes to people who are there for a good time is all that counts. It doesn’t matter how many are there, if the place is bouncing then it’s all good.

Q: Having played with acts like Marilyn Manson, Gary Numan and The Prodigy, if you could choose any other band to play with, who would it be?

A: Yeah that’s a hard one, I’ve never really thought about that to be honest. I guess with every band I’ve ever really been into it would be an honour to get up and play one song with any of them. Ican’t pin point one, that’s too hard!

A: People call it The Grim North but I find the people in the North are far more down to earth and way less pretentious. And Northerners are always up for some madness.

Q: Where do you think are the best cities to play in up North?

A: Manchester is always good and Liverpool. Newcastle and Glasgow are always full of complete and utter lunatics. Our tour manager is a geordie so whenever we get up there it’s utter mayhem when all his friends turn up!

Q: What are your plans for the future with your band Sulpher?

A: We’re just about to sign a publishing deal, which is great, and myself and Monti are still putting the finishing touches to the new material that always takes forever to complete due to both our schedules.

Q: And what about The Prodigy?

A: Liam is deep into the finishing stages of the new Prodigy album and I believe it will be out very very soon!