Losers and Rob Holliday to play The Duchess 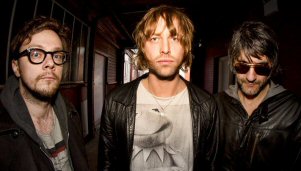 Losers have been gaining traction in the US.

A night of electronic rock from Losers and Prodigy guitarist Rob Holliday is coming to The Duchess on September 12th.

UK band Losers have been building a name for themselves over in the US, with their music appearing on trailers for Game of Thrones, the video game Far Cry 3 and Michael Bay’s pirate adventure series Black Sails. They are made up for XFM DJ Eddy Temple-Morris, former Cooper Temple Clause member Tom Bellamy and ex-Automatic and YOURCODENAMEIS:MILO bandmate Paul Mullen.

Meanwhile, Rob Holliday has a long history of working with alternative electronic acts, including Marilyn Manson and Gary Numan. He is currently the guitarist for The Prodigy.

These two acts are the leading names on a line-up put together by Soundsphere magazine, which is based in the North of England and is focussed on alternative music.

Big acts in a little venue

Holliday’s appearance at The Duchess is the only UK gig he is doing in 2014. He said: “I don’t DJ often – I only do ones that are interesting to me. It makes it feel like one big house party with your mates that way.”

Losers are also keen to appear at the intimate venue, Temple-Morris said: “It can be so powerful when you can see the whites of the audience’s eyes.” 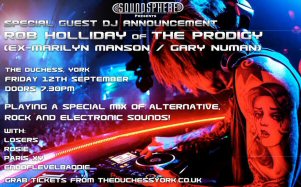 “The general rule is, the further away from London, the better the crowd, so this should be great.”

Joining them on the bill will be Yorkshire rock act Rosie, who were recently announced as unsigned act of the week on BBC Radio 1 with their single Midnight.

DJ Endoflevelbaddie will also be there. He too has been getting a lot of attention from Radio 1 and has supported the station’s own DJ Pete Tong.

There will be more Yorkshire bred music as Leeds-based electronic duo Paris XY have fit in this show before they head out for a series of gigs in Europe.

These bands are no strangers to big crowds. But just because The Duchess is a small venue, Rob Holliday has promised that there will be no shortage of showmanship: “Whether you are playing to 50 or 50,000 people, they all deserve the same energy you’d give at a massive festival.”

The gig is this Friday, September 12th, and doors open at 7:30pm. Tickets can be bought either on the day for £7.50 or in advance from The Duchess’ website for £6 plus booking fee.