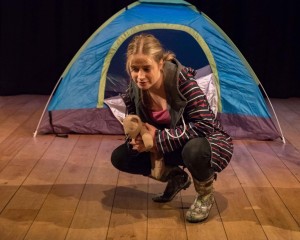 Charlotte Wood in The Castaways, photo by Michael J Oakes

Written in response to record flooding of the River Foss on Boxing Day 2015, The Castaways brings the refugee crisis home to York. Flooding and coastal erosion have ravaged many parts of the UK, and scores of towns and cities have been destroyed. Despite the warning signs, the rallies and petitions, the problem has been largely ignored. Now the country is in a state of emergency.

The international refugee crisis is not going away, and neither is climate change. Writer Rachel Price turns the tables to sink the story home for a comfortable white audience. Young mum Sam (played by Charlotte Wood) and her son Alfie are forced to flee their home in York and join a growing population of desperate migrants embarking on a journey that will lead them from camp to camp. As the country lurches towards environmental devastation and the veneer of civilisation begins to slip, Sam must face a dangerous decision in order to survive.

Rooted in York’s precarious environmental truth, Price’s script hones this story of survival, hope and vulnerability from the incomprehensible figures we hear on the news to the personal we can’t help but feel in our waters. Having toured to schools in Hull, Leeds and Sheffield this year, Artistic Director Rebecca Thomson says The Castaways is resonating with audiences who know a lot or very little about the situation, and is encouraging people who came to the UK as refugees to share their own personal experiences.

“A fantastic, powerful and gripping performance, everyone should see it” – Hull Help for Refugees

Catch The Castaways at York Theatre Royal Studio for one night only on Tuesday 20th November at 8pm. Tickets available here.