My Mother Said I Never Should: Holding back the years 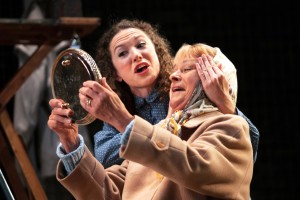 London Classic Theatre’s Artistic Director Michael Cabot revives their nigh-flagship millennial production in this new iteration of Charlotte Keatley’s era-hopping domestic drama, purported to be the most widely performed play ever written by a woman, though it is new to York Theatre Royal. Spanning four generations of women, the play examines motherhood, growing pains, innocence and self-preservation.

Designer Bek Palmer overturns the minimalist stipulations of Keatley’s face-changing setting and roots this production firmly in The Wasteground; a liminal space of temporary safety – high, barbed fences, wreckage and sirens dominate a small patch of makeshift playground in which four women gather and morph through various ages in time and in themselves. Cool lighting by Andy Grange alongside the text’s jarring opening featuring problematic nursery rhyme and grown women acting as fairly stereotypical version of young children makes for a distancing entry.

The cast is strong, though the characters not altogether relatable – something keeps them out of reach throughout. Carole Dance spans the widest range of years as Doris, appearing first at age five and eventually becoming a great grandmother to the independent and vivacious Rosie, played by Felicity Houlbrooke. Kathryn Ritchie portrays granddaughter Jackie as disappointing and ineffective in her early personal life before easing into a successful career but maintaining her outsider status from the family. Connie Walker is excellent as Margaret, Doris’s daughter and the keystone of the family. Her sense of devoted exhaustion and integrity really sell the tough decisions she has to make, although her performance is hindered by the graceless swerve of the text from pillar of strength to the tragically crumbling institutionalised mind she becomes.

Written in 1985 and set in Manchester, Oldham and London, the play speaks little to a modern audience. The immense social changes of the twentieth century are here compacted into one emotive through-line, and there is something oppressive about the perspective the show emits. This may be down to the strength of Walker’s Margaret, whose delicate balance of fulfilment and emptiness leaves a weighty aftertaste or hurts unspoken. It is difficult to see what has been done to interpret the text for a 2018 audience; indeed, it remains of the ilk of any other misguidedly ‘modern’ 1960s-80s GCSE Drama script this millennial and her classmates cringed to be assigned. Press bytes call the play ‘unique’ and ‘revelatory’, but between the women blaming each other for men’s misgivings and the suppression of their true desires and needs throughout, any millennial would be hard-pushed to find it either. Our kingdom to be spoken to, and not for.

Read more about the show and company here.