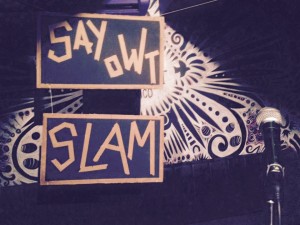 Sophia Walker will be headlining the night with her Cult Friction solo show. She will be supported by US poet Adele Hampton, Yorkshire poet Marina Poppa, York’s own Rose Drew and actor and writer Lily Luty. That’s alongside an open mic session beforehand, which is open to people of any gender.

Say Owt Slam was set up by York poets Henry Raby and Stu Freestone to bring people from York’s spoken word scenes and beyond together. As well as York, Say Owt Slam has travelled to Newcastle, Leeds, Hull, Manchester and Durham. This upcoming event fits in with the themes of York International Women’s Festival, which promotes women’s rights and participation in political and economic processes.

Walker has performed in various places across the UK, including at the Scottish Parliament and Royal Holloway Prison. She also represents the UK in the World Queer Slam and is the host and organiser of the BBC Slam Championship. As well as writing individual poems, she also writes plays in spoken word.

In the multi-character solo show, Cult Friction, Walker looks at the subject of neuromarketing and how it is used to exploit people. The characters include Walker’s granddad, Steve Jobs, a Belieber, the Belieber’s mum and neuromarketing expert Martin Lindstrom.

Say Owt at York International Women’s Festival is at York City Screen Basement on March 11th. Doors are at 7.30pm and entry is £7.

To take part in the open mic session, email [email protected] or put your name down on the door.