Dr Sketchy’s Bowie night: a feast of sound and vision 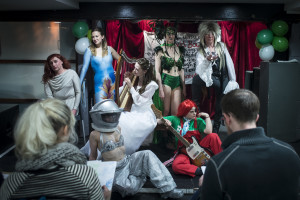 Dr Sketchy’s took an innovative angle for honouring the late David Bowie when they combined art, music, Bowie-inspired costumes and burlesque in their Night of 1000 Ziggy’s at Basement Bar at City Screen.

This life drawing event, set to a soundtrack of Bowie’s hits, was in the name of charity as all proceeds from ticket sales, cake sales and donations went to Macmillan North and East Yorkshire and Humberside. They raised £350.

What was most striking about the night was the instant sense of community when you took your seat in the room. Smiling people dressed like David Bowie walked about the room, handing out paper and pencils, making sure guests had something to draw with and on. 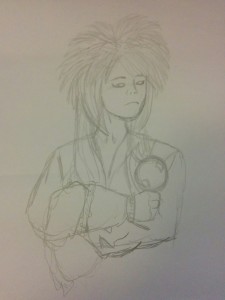 Guests were encouraged to talk to each other and told that this is a life drawing class that doesn’t care how well you draw, just that you take part.

That being said, it was a little daunting at first as the night began with a series of five-minute sketches, each model stepping out one after the other. Each had a different take on aspects of Bowie’s rock and roll life. The first model was Hallowe’en Jack and she was followed by a female Major Tom. For Labyrinth fans, there was a duo of Sarah and Jareth. Burlesque performer Scarlet Butterfly appeared as a drug-fuelled hallucination, embracing that aspect of Bowie’s life, and there was an elegant, cross-dressing Jean Genie too.

While artists took a short break, Jareth, who is also York’s Magic Ball Man, and Sarah returned to the stage for, true to character, a contact juggling performance with crystals.

For the next set of poses, artists were given ten minutes for each model who, in turn, positioned themselves within the audience so they each had their own to draw. 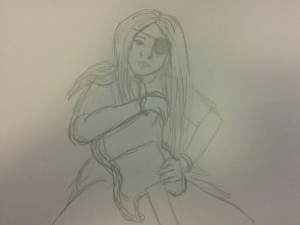 Then it was time for a break and one of the cornerstones of a Dr Sketchy’s night: a burlesque performance. Scarlet Butterfly’s dance was based on an Absinthe hallucination, using various props and her green fairy costume.

In the final part of the night, all models assembled together in poses that artists had 15 minutes to draw.

By the end of the night you felt like you’d really got your creative juices going, like it was OK to draw however you liked and you felt fully welcomed into the Dr Sketchy’s fold. It was a creative, alluring and eye-opening event.

The Thin White Duke would have approved.

One Response to Dr Sketchy’s Bowie night: a feast of sound and vision