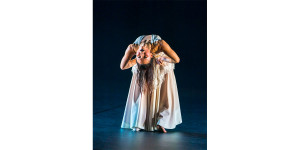 Vanessa Vince-Pang in The Rite of Spring, Photograph by Tristram Kenton

“The Rite just has to be shocking. If it doesn’t shake you to the core, if it doesn’t make you feel that the guts of the earth are opening up, or at least that the Royal Albert Hall is being immolated in orchestral violence, then the performers just ain’t doing it right.” – Tom Service, BBC Proms 2013

The all-consuming tumult of Igor Stravinsky’s 1913 ballet has taken on many faces across the past century, including the landmark Fantasia (1940), blasting apart and rebirthing the language of music and dance without rest. How apt, then, that Phoenix Dance Theatre step into this orchestral feat that still, over a hundred years later, sets the auditorium alight.

In signature Phoenix style, the work is a double-bill of brutalist and audacious tones. Embracing history in full, the performance emanates elements of Kabuki, Ball culture, Greek tragedy and Shakespeare. Marquez channels the poise of a drag house mother; the women thrash out a visceral pagan headbanging Evocation of the Ancestors; the ensemble become a crowd of Lady Macbeths afrighted at their blood-stained hands.

Marie Rambert, speaking in 1968 of the world premiere performance of the original ballet, says, “It was terribly difficult to hear the orchestra because of all that noise in the audience.” Here, after the riots, the music remains relatively low, placing the focus directly on the marvel of the dancers, who move in turn like earth, fire, air, water and vengeance. Choreographed by Jeanguy Saintus and lit by Richard Moore, The Rite is grand and devastating. The Sacrifice is a terrifying consumptive plague of shudders infecting the dancers one by one, dread breaching like a whale while you watch bodies slump, shake and catch each other even as they fall, eyes rolling. The evisceration is absolute.

Preceding The Rite of Spring is Left Unseen, an original commission by Northern School of Contemporary Dance, choreographed and conceived by Amaury Lebrun. Set to music by Alva Noto & Ryuichi Sakamoto and Hildur Gudnadottir, with costume by Emma Louise James and Melissa Parry, it explores inclusion and isolation through stark intertwining of stillness and struggle. Mark Baker’s Lighting perfectly follows the ebb and flow of anxious snatching, dragging and heaving moves between the performers, making for an emotionally affecting abstract, opening the piece in a dim spotlight as gradually as a nervous sunrise. Dancers make sudden disappearances, strutting carefully out of the rationed light; others are not waving, but drowning; Vince-Pang leads a fraught duet with Muntanga, irradiating manipulative butch threat in a struggle between nurturing touch and suffocation; corpse leeches crawl towards an exhausted survivor, with meticulous attention to detail in their minute tremors of kickback even as they lurch forward.

As always, Phoenix are such an intense thrill to watch that it brings tears to your eyes.