Mad Alice: “I was a witch that day” 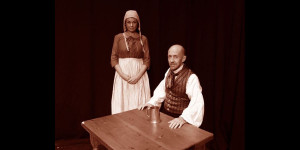 Inspired by local landmark Mad Alice Lane, Victoria Delaney’s new original play investigates the local legend we all think we know, but cannot accurately place in history. Opening in the ‘Mucky Duck’ (White Swan Inn) in 1825, an ominous electronic soundscape threaded with rumours and whispers plays as the cast creep on stage one by one, immediately establishing palpable dynamics between them with the slightest of glances.

Based on research into local history, with a view to telling Alice’s story in her own words, this direct, confrontational piece aptly carries an atmosphere of existing outside time. Subtle shifts in eerily coloured Lighting by Matt Pattison and Alexander King, and Sound Design by King, aid surreal slow-motion-fast-forward transitions that carry the audience from one act to the next. We begin by witnessing one evening’s onslaught of misogynist bullying by Alice’s husband William (Bill Laughey) and his cousin Robert Johnson (Keir Brown), directed at a distracted, glassy-eyed Alice (Delaney herself) as she sweeps and cleans the pub around them.

Dedicated to her brother Matt, Delaney infuses the play and character with a magnetic weight of grief, exploring comfort, loss, and social presentation in the event of great tragedy. Alice suffers much, and says little, while the insults and abuse pile upon her. “Beware the fury of the patient man.” Wanting a show of penance for Alice’s ‘ignorance’ in not responding to his cousin, William insists that Alice shall starve herself for the rest of the day, before demanding that she make use of one of the two reasons he keeps her around by making two pies for the men, from scratch – a talent she is known for.

Obliging as always, Alice appears shortly thereafter with the two fresh pies, one topped with a pastry W, William immediately disparaging it as “for the Wicked Witch who made it.” The men promptly wolf down their pies, Bill still mercilessly mocking Alice and arranging bedtime liaisons with Betsy the barmaid (Ellen Carnazza), before he humiliates Alice by dragging her face into his meal. This gives us a chance to make more of Father Joseph, a priest previously nursing a glass of milk at the bar in relative quietude, who steps in to rescue Alice from the spotlight of mockery. Between his doting, attentive cleaning of her face and her fragile outward stare, the moment is utterly gut-wrenching.

The pace picks up quickly, and each of several captivating vignettes vie for your attention as Johnson starts ranting about his pub, Bill keels over choking on his food and Betsy panics. It’s not long until Bill is determined dead.

What follows is a flurry of ghostly rewriting; bodies creeping up and backwards, imprinting images of their interactions upon you before disappearing with pieces of set to make way for act two: the trial. Alice is in court to answer for the poisoning of her husband, the late William Smith, and no one is in her corner. Using the now-separate three-part wooden bar as court podiums, Johnson, Betsy and Alice take turns in testament to paint their picture of the event.

With Lynchian focus, each character is given ample time to say their piece, every moment captivating and convincing. There is great strength in the simplicity of the accusations and the disclosures; what could be more piercing of our global situation than Alice’s steadfast commitment to justice and claiming agency over her narrative in the face of impossible authority. The crowd mentality baying for her blood is shocking only in the purest, most physical sense of the word, leaving your defences ragged. No stone is unturned.

After Alice is inevitably pronounced guilty and sentenced to death by hanging, she moves into a holding cell, rendered cold and lonely in bluish light and ethereally undead in her plain white robes and cap, startling pale eyes wide with pleading prayer for comfort in her last moments.

Sonia Di Lorenzo and Matt Pattison cameo as Alice’s parents in her desperate remembrance, their gentle presence and soft Irish voices cradling her in her hour of need, and we learn the importance of Alice’s perpetual song as she is then visited by the potent haunting of her husband and his snapping belt; it is her sword, her shield, her banishing spell.

Regressed into apologetic whimpers and a fetal crouch, the battered Alice is kneaded back to coherence by a final visitation from Father Joseph, in which they both divulge revelations. The climax of the play is masterfully dealt, played to the deathly end with patience and punch.

If anything, there are moments in which the action can be allowed to breathe even further, where more deliberate and confident pacing would give it stronger impact. Regardless, this is an intense new piece of work full of superb acting and immaculate prose, married to our time and hers, raising an unforgiving mirror to our endless cycle of violence.