Pantheon on heavy metal and touring in Europe 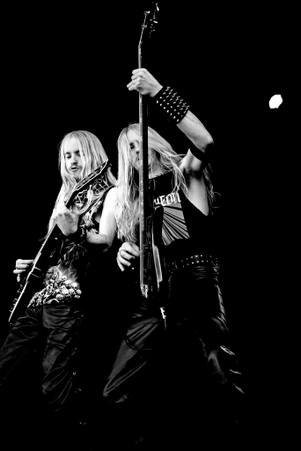 York heavy metal act Pantheon have had a following on the UK underground for years and recently played their first shows in Germany and the Netherlands.

Ahead of the gigs, guitarist Matt Dawson got talking about their European shows, what it is that still inspires him and memories of touring.

Q. How do you feel about playing your first shows in Europe, outside of the UK?

A. It’s something we’ve always looked at doing. It feels like a huge honour for me. The German and Dutch metal crowds have made us feel very welcome. We feel excited, prepared and just eager to step up to the next level and the challenges and experiences it brings.

Q. What was it that got you doing shows in Germany and the Netherlands?

A. Venues contacting our management and utilising some contacts we’ve made on our biking travels. You need to be prepared and have all the bases covered; songs, image, organisation, professional attitude.

Q. You’ve been going for many years now. What inspires you to keep playing?

A. I think once you get the metal ‘bug’ it’s a lifestyle and philosophy choice. I think at first a band is the expression of the passion you have for the music. We then got this drive to continuously seek to improve as songwriters and musicians. You can then reap the rewards of playing bigger, better gigs and enjoy the places and people the journey allows you to encounter. It’s the ultimate buzz.

Q. Have you got any new releases coming up? If so, what can you tell me about them?

A. We’re in pre-production for a new mini album with metal producer Zac Bajjon at Silverbear Studio. It will feature all new songs about subjects we’ve experienced closely in some way. Cyrus Crashtest will be doing the artwork and it will be released later this year. It will mark the next step in our development and already features some pretty massive, crushing riffs if I say so myself.

Q. What is it that makes you guys work well together as a band?

A. Being brothers with the bassist/singer works well. We have similar vocal capabilities. We always have a clear plan for the future and make sure that we’re making steps forwards even if there are a few back steps along the way. We also have a grasp on the sound of the band as we grow, so we know what we’re aiming for when we’re writing new material.

Once you see a grown man dress up as a giant lobster made from painted paper plates and a bike helmet, your perspective on life changes somewhat.

A. We did a mini tour with Skull Branded Pirates before we re-launched the band. We played a lot of shows on the underground circuit all over the UK back then to ‘learn the trade’. Anyway, once you see a grown man dress up as a giant lobster made from painted paper plates and a bike helmet, your perspective on life changes somewhat. More recently, it’s the simple things like meeting new friendly people with the same life philosophy and playing a great gig. Just the other day the owner of Underground in Wuppertal was kind enough to show us round the new planned extension to the venue; chatting casually with the guys at HeadbangersFM in Hoorn about metal in the Netherlands, it’s a privilege.

Q. What are the biggest challenges facing bands these days?

A. A lack of role model bands and people treading down new bands efforts. I also feel the current ladder upwards for bands is a minefield, you need to be on top of everything and find someone to show you the way, or you’ll just lose heart. Also, funding, a dwindling supply of venues in smaller towns and cities and an invisible metal scene if you’re not looking for it. You really have to be searching for the scene these days in the UK, so it’s harder for people to ‘stumble’ across metal like many metal heads did when they are younger.

Q. What musicians influence you these days?

A. Our influences seem to change every day. We always ‘tip our hats’ to the greats, like Judas Priest and Sabbath, but we like to think we draw on all styles of metal in some way while remaining honest and British. For playing, Gary Moore, Mark Knopfler, Dave Murray, Billy Gibbons. I like players who consider every note in their playing, not just the ‘widdly’ bits. My favourite composer is the late Jerry Goldsmith, he wrote some brilliant scores.

I think we’ve always loved the energy that comes with metal and the worldwide brother and sisterhood in metal.

Q. What experiences outside of music influence your lyrics and sound?

A. Lyrically, anything that we experience either first hand or anything that has spoken to us from the media; books, films, YouTube, Edward Snowden, the Judas Priest trial. I think it has to be that way or you’re not really writing about anything you feel about and music is all about feeling, surely. I think we’ve always loved the energy that comes with metal and the worldwide brother and sisterhood in metal. No matter what’s going on, metal is a way of giving a big ‘fuck you’ to all the negative people in the world. In a way it’s done so much to help us, so we feel obliged to help keep British metal alive and current.

Q. What advice would you give to new bands starting out?

A. Pick your goals early on and never stop moving forward. Find people who want to and can help you and look after them!

Q. What plans have you got for when you get back from Europe?

A. As soon as we’re back, we’ll be working on the new release and continuing to write new songs moving beyond the mini-album.