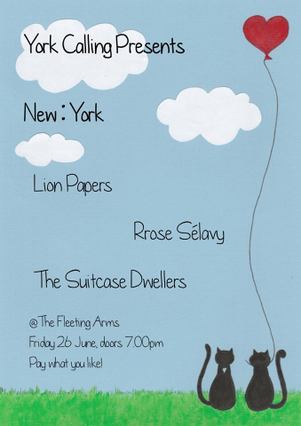 New musicians will be coming together for York Calling’s first ever gig, aptly titled New: York.

On Friday 26th June 2015, three fresh, upcoming musical acts will light up The Fleeting Arms, which has played host to local creatives across the York area since opening earlier this year.

The audience will be given the option to pay as much, or as little as they like for the performance, with all proceeds going toward the artists themselves and maintenance of the pop-up venue.

Here’s a rundown of the artists taking part.

Lion Papers comprises vocalist and drummer Curtis Pearson and guitarist Jimmy Ingham, who have been performing in bands together since they were thirteen years old. The pair describe themselves as acoustic, although they come with a twist. They focus on having fun, being relatable and creating music they love. Their debut single ‘Beautiful Disaster’ was launched in March of this year.

Inspired by the likes of Mumford and Sons, Laura Marling and Ben Howard, female musician Rrose Sélavy is a passionate songwriter and an award-winning poet; a combination resulting in a poetic-folk wonder of acoustic guitar, poignant lyrics and sophisticated vocals. Her work is largely inspired by nature and she can easily pin-point her favourite tree in Yorkshire. Her debut EP ‘I am Like the Tree’ was self-released in 2014.

Starting out in 2014, aptly-named The Suitcase Dwellers use a suitcase to create a unique sound by kicking it in time with their songs. The folksy acoustic duo are inspired by a wide range of influences and use a combination of different instruments and vocals. Suitcase Dwellers’ bio describes them as  “telling stories, singing sweet ballads and exciting audiences with foot stomping, suitcase kicking songs.”

York Calling editor Graeme Smith said of the The Suitcase Dwellers: “Though sitting firmly in the ‘folk’ genre, An Introduction has the potential to bring The Suitcase Dwellers mainstream commercial success, with a sound that’s easy to get into and beautifully put together.”