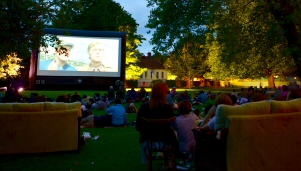 It started with four York St John University graduates. Now they do media as far away as Hong Kong. Orillo Productions is a film brand that just continues to grow.

Some may already be familiar with their expansion, Orillo Cinema, which recently held a ‘Vintage Britain’ themed film screening in the Minster Gardens.

This was complete with a bar, cinema snacks, pre-film entertainment courtesy of local performers The Y Street Band and free ponchos should the weather have taken a turn for the worse.

But the company began with Orillo Productions, which works alongside corporate businesses and creative industries to make footage. The work they do includes music videos, events coverage, short films and documentaries.

Among their clients is Jack Wills, the high street clothing brand, which has had the team working in Hong Kong, America, London and various locations across the UK.

“We gain the majority of our clients through word of mouth, businesses seeing our work and effective, innovative and unique guerilla marketing,” said Kate of Orillo Productions.

As well as film production the company also has their outdoor film screenings with Orillo Cinema. Most recently, they played the 1969 version of The Italian Job in the Minster Gardens.

For the night, Orillo Cinema invited people over Facebook to vote for the film they wanted to see. Cinema goers had the choice between Billy Elliot, The King’s Speech, GoldenEye, The Full Monty, Four Weddings and a Funeral and the winning film The Italian Job.

Those who attended were given free Orillo sunglasses in red, blue or, for a lucky 250 people, white. The colours were, of course, in keeping with the night’s Vintage Britain theme.

Art York asked Kate of Orillo Productions what the thinking was behind the expansion.

“Our ideal aim was to make cinema going something a little different, what better way to watch some classic films in settings such as Minster Gardens and Museum Gardens?” she said.

“This has been a fantastic expansion for the company which has opened even more doors to such events as Pop Up Bars and also the launch of our very own Vodka Range,” she added.

But how does a film company gain momentum when they’re set up in a city like York? A place which, in honesty, isn’t exactly Hollywood. Kate offered a few pointers.

“There are plenty of opportunities for filmmakers in York if your willing to stand out from the crowd and not follow the safe route; its all about pushing yourselves to being that little bit different and taking risks,” she said.

The company set up at the Phoenix Centre on Lord Mayors Walk in 2010. York St John University offers the centre to help entrepreneurs start their businesses. Initially, Orillo Productions worked around the city making footage for small businesses.

Now with their new Cinema expansion and work across the globe, it looks like from here Orillo Productions will only go upwards and outwards. That’s not just in film production but also with the other ventures they have up their sleeve.

“We don’t look at ourselves as simply a filmmaking company, we are a Brand which is only getting stronger and with the expansions such as cinemas, bars and vodka we give people a sense of our personality and the lifestyle of our brand.”

If you’re curious about their film production, here’s a recent video they made for Jack Wills: