Crave return with a new sound 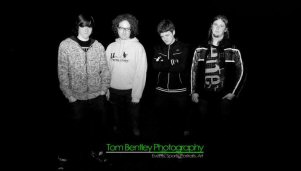 Since the mid 2000s, Crave have been gaining a following on York’s local music. But eight months ago, outside issues forced the band to call a hiatus.

They promised that when it was possible, Crave would happen again. In June this year, it did.

Their comeback gig saw them headline at a Volkswagen Rally in Pateley Bridge to a whole new audience.

Now, as the band are a little older, what started as a hobby grunge set up has grown into something with a heavier sound and a more aspirational outlook.

Their bassist, Dan Hartley, got talking about Crave’s return and gave a little insight into what they’ve got coming up.

Q. How did your comeback gig go?

A. We got encored twice so we obviously went down really well. We did a mixture of covers and originals but the originals went down as well as the covers, which was really good.

After being out of it for so long, and that was without many practices either, it was a relief to know that we could just get back together and not have lost any of the gelling that we had before. It was nice to know that we could put on a good show after so long out and people who hadn’t heard of us before the day really enjoyed us.

Q. What has changed?

A. Because we have had quite a bit of time between the last release we have developed as musicians and our influences are changing.
It’s probably drawing on that and because as our personal tastes change in music it can affect our style. So the majority of what we are doing now is now more music based rather than lyric driven and vocal line driven.

A. At the moment personally I think it sounds a lot in the riffs a bit Slipknot-y but vocal wise not at all. It’s kind of more Deftones-y vocals. It’s gone more from being very chord, vocal, solo, bridge whatever to being just, like, riffs with vocals. The riffs are taking the front a bit as opposed to the vocals.

A. Completely different. It has gone from being essentially juvenile songs. All the sound on the other album was written sub 2006 and some of the songs are going back to when Steve was 13 or 14 so some of the lyrics aren’t going to be the most mature.

Q. How do you think the dynamic of the band has changed now that it’s more than a hobby?

Q. Can you give any details on Crave’s future releases?

A. We have actually got it all coming up at the moment. Instead of releasing another full length album we’re going to release a series of EPs.
All the songs kind of come in groups. So the middle release is going to be a bit of everything. The first one is going to be a bit darker and a bit heavier on the music side. On the last one we are toying with the idea of a conflict that has been going on, which I can’t tell you much more about but it’s going to be a good climax.

Q. What’s your professional plan for the band now?

A. We’ve been doing a lot more Facebook stuff than we have in the past which is quite a good way of doing it. Other than that we have not really done much in the way of promotion at the moment. We’re waiting until we have got a new release that we can do or some merchandise so people have got more than just “we are Crave, nothing has changed”.

We’re toying with the idea of approaching a promotions company because we now have more experience in it but it’s more just toying with ideas and seeing where it goes.
What we are looking at at the moment in the beginning to middle of next year is maybe doing a UK tour. Maybe starting at the small venues but if we, say, got a label behind us that would be great.

We’re pretty confident that we want it to go somewhere. The chance doesn’t came along very easily so we know we have got to put a lot of hard work into it and have a bit of luck on our side.

Crave’s next gig is at Rehab Bar in Harrogate on 26 August. Check out their new track, Siren, on YouTube.