Heart of Darkness: interrogating the canon 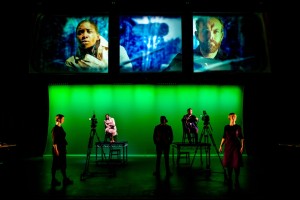 The cast of Heart of Darkness, Photo by Ed Waring

imitating the dog present a deconstructed retelling of Joseph Conrad’s classic novel about the impact of European colonisation in Africa; a Lynchian reach into our collective psyche that challenges what we are obliged to keep or discard when engaging with our cultural canon. A pertinent study for our time of rising nostalgia for imperialism.

[INTERIOR: We begin in darkness.]

A small ensemble cast – Keicha Greenidge, Morgan Bailey, Matt Prendergast, Laura Atherton and Morven Macbeth – run a tight ship with exposed craft, operating live cameras, radio mics and video mapping while performing, alongside music by Jeremy Pyton-Jones that feels so fittingly immediate that it could easily be live foley. This is very much a responsive adaptation interacting with its source text. The company’s considerations on the ethics of adaptation form an integral part of the show, perhaps even verbatim.

A few distinct modes intersect and alternate, punctuated by news style bleeps: workshop discussion on how to ‘stage the impossible text’; a kind of live screenwriting of the adaptation, and the staging itself – a surreal, distorted noir film reminiscent of Twin Peaks in its genre pastiche-cum-mastery. This combined with the live mics and video, and the use of raised and free-moving platforms, creates an apt sense of displacement that demands your concentration.

Neatly structured throughout the first half, these meticulously thoughtful sections develop subtly until they seem to verge upon indulgence, then steer in new directions. One workshop section explodes the existing revisiting of shared cultural references. They need Blade Runner meets Sin City meets, of course, Apocalypse Now.

The invitation to the audience to meet the core intention or meaning of the piece ebbs to and fro; we are never spoon-fed despite some ostensibly heavy-handed speeches, and although the actors are all present on stage showing us exactly what they’re doing, the sense of depth and obstacle created by the use of the stage keeps us from breaking through a final layer.

However, the tone and sense of space do shift palpably, bringing an enthralling if psychotic Kurtz (Prendergast) to bear over our enigmatic Marlow (Greenidge) in a final sequence that is allowed perfect time to breathe and to engulf the audience with its literary weight.

Faithful in structural and emotional complexity and core message, while churning through the distracting failings of the original, this piece serves as a parent to Conrad’s Heart of Darkness; acknowledging its validity and bearing out its flaws to grow its ideas further for its future. Where Noughts & Crosses handed us a fully formed dystopia, this show instead presents a wealth of content, sifted and challenged, encouraging us to consider “what is seen or what one is asked to see”, as Research Consultant Elnathan John states.

And if that doesn’t do it for you, I defy any Brit not to be (even more than usual, because surely we sit at a default state of around at least 70%) depressedly ashamed by the Land of Hope and Glory montage showcasing Nigel Farage spouting thin trash, Boris Johnson dangling through the air on ropes waving his pitiful patriotism and Saturday night drunks flashing the camera. And yet, this is not about saying “____ is cancelled”. It is a healthy, engaged, meditative praxis that we should all be applying to our problematic time. Remnants of trauma from previous scenes remain on Marlow’s face in her final appearance, and yet she goes on.

This production is bold, captivating, delicate and thoroughly considered. It continues on its UK tour until 11 May. Watch the trailer and get your tickets here.