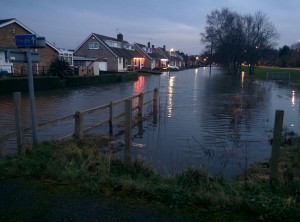 Flooding near the River Ouse.

Two music events in York this weekend are raising money to help the city’s flood victims.

The Ainsty pub is holding a Music Weekender on Saturday 23rd and Sunday 24th January, featuring a large selection of local bands. Meanwhile, The Woolpack is hosting a David Bowie tribute night on the Saturday night, where local Djs will be playing a range of music from the legendary musician.

In December, over 600 homes and a number of businesses in York were flooded when the River Ouse and River Foss overflowed. Victims included a number of creative businesses, such as Melrose Yard Studios and the artists’ studio Rogues Atelier.

Since then, Apollo Festival and Vale Radio clubbed together, with plenty of bands stepping forward, to create the gig at The Ainsty to raise money for flood victims. The event is £5 to enter and features acts like Boss Caine, One Way Street, The Cover Lovers and The 5:15s. On Sunday, there will also be a raffle.

Organisers of Friends Electric, an alternative 80s monthly club night, set up the David Bowie tribute night following the death of the musician and actor on January 10th. As well as playing music from across Bowie’s 49-year solo career, there will also be a raffle. Prizes include a signed and framed poster of Bowie.

Entry to the night is free, however donations will be taken. As well as helping flood victims, proceeds will also go to help an eight-year-old from Manchester called Alfie Lund, who has been diagnosed with a rare bone disease.

There are a number of other appeals for flood victims, which people can donate to online. Two Ridings Community Foundation is running a North Yorkshire Flood Appeal. An appeal to help Melrose Yard Studios has reached its target but is still accepting donations. There is also a Go Fund Me page for Rogues Atelier to help get the studio up and running again.