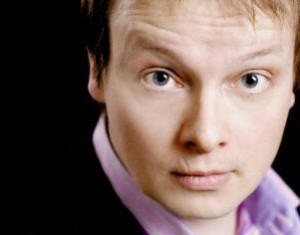 Komedia promised a night of top notch stand up from comics from all over the country and, for the debut night of the Krater Comedy Club, the bar was set high.

Comedians of varying ages and humour, Michael Fabbri, Adam Staunton, Laura Lexx and Chris Turner, came up to York for the night. Holding the night together was founder of the Krater Comedy Club and compere Stephen Grant, who was always involved with the audience, regardless of how they reacted, always with an impressively quick witted response.

If Fabbri was self deprecating then Adam Staunton took it to a newer, almost darker level. Beginning his set with a string of quips at his own expense, you found yourself caught between the want to give him a hug and the uncontrollable desire to laugh. He uses his youth well, satirising the conundrum of an unfortunately large proportion of Generation Y: the inability to find a job regardless of qualifications. A sad subject, yes, but his stories were still side splittingly funny.

Laura Lexx comes off as a sweet girl but with no shortage of wit and occasionally crass jokes. She characterises the trouble of being in a long term relationship without the typical comic’s approach of criticising their other half. Yet one of the greatest angles of her set is her ability to single out members of the audience in such a way that looks uncomfortable for them but is hilarious for everyone else.

Chris Turner was the last of the night and very varied from the other comics. He has the look of a young Stephen Merchant – tall and nerdy, which he uses as part of his act. Turner is all about intelligent puns and jokes that make you take a second to work out before laughing. He had an entire section about a love for hip hop and creating a persona for himself surrounding this, which is made much funnier in contrast to his geeky image.

As a freestyle rapper too, Turner proved his interest in the genre when he challenged the audience to come up with words that he could turn into a rap. When they offered up phrases like professional indemnity, a gliding croissant and Scottish hummus, he had his work cut out for him. Nevertheless, his delivery of a funny rap was effortless.

So yes, the comedians that came to York for Krater Comedy Club’s debut in the city set the bar high. It’s a regular night now so if you’ve got a Sunday night free and want a hearty laugh, this could be worth checking out.