Ghost Bus Tour: as funny and creepy as it looks 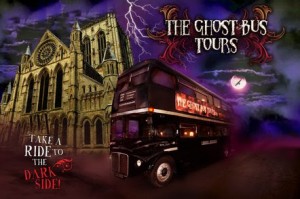 The Ghost Bus Tour is a dark and funny way to see the city.

Hallowe’en is coming up and, indeed, there is something strange in the neighbourhood. So if you are planning some sort of spooky festivity, who are you going to call? How about the Ghost Bus Tour?

You may have noticed the black bus turning up in Exhibition Square lately. On first impressions it’s like the City Sightseeing Tour bus and the ghost walk have come together in one and it does seem to have elements of both. However, this bus has a more vintage feel than the City Sightseeing Tour, particularly with it being a 1960s Routemaster. Like the ghost walk, it’s great fun whether you are a tourist or not.

The bus is advertised as a sort of comedy theatre tour of York. Indeed, if you have a slightly dark sense of humour and a taste for bad puns, which are also self aware, then it does not disappoint.

The York edition is the latest from the Ghost Bus Tours comedy theatre company. They have buses in London and Edinburgh and also run the London Time Tour Bus. On their previous travels, they have entertained celebrity guests including Jonny Depp and Amanda Holden who are both on record of saying they enjoyed it.

Now in York, the tour is led by local actors and combines video and performing arts with a leisurely drive around the city. Well, as leisurely as you can in an old school rickety bus – although that’s all part of the sensation.

With these elements at the Tour’s disposal, the tour is much more involved than most. In between sights, you enjoy videos of the ghosts of Richard III, Dick Turpin and Guy Fawkes. On top of that, there are two occasions where you step off the bus to take a look at some sites renowned for ghost sightings and being important to York’s history. You will be confronted with some odd goings on but Arts York will not spoil them, you will have to see for yourself.

It’s an all round funny, cheeky and visual tour of York and certainly worth giving a whirl this October.