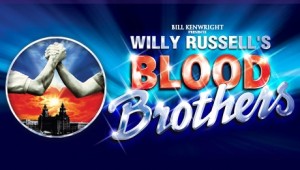 Bill Kenwright’s long-loved production of Blood Brothers returns to the Grand Opera House York with Lyn Paul in the iconic role of Mrs Johnstone for the final time, joined by Joel Benedict as Eddie, Danielle Corlass as Linda, Danny Taylor as Sammy and Chloe Taylor as Mrs Lyons. Alexander Patmore returns as Mickey alongside Robbie Scotcher as the narrator.

Written by award-winning playwright Willy Russell (Educating Rita), the play is a star in its own right, winning four awards for Best Musical in London and seven Tony Award nominations on Broadway, now exceeding 10,000 performances – one of only three musicals ever to achieve that milestone.

The story of twin boys Mickey and Eddie, separated at birth only to be reunited by a twist of fate and a mother’s haunting secret, is moving as ever and the earworm score performed brilliantly. The haunting repetition of the Marilyn Monroe melody and the emotionally charged hit My Child/My Friend fulfil their epic legacy.

As talented as the cast are, the weight of the story this time sits more with the young trio of friends than the helpless mother – possibly because Scotcher’s narrator is so downplayed in comparison to his predecessors, and Paul’s Mrs Johnstone more static, making for a relatively subdued rendition of the tale that has historically been full of fire and venom in its dramatic representation of “what we, the English, have come to know as class”. The usual thunderclap of Devil’s Got Your Number is sadly more of a hovering cloud, and the sassy set-throwing is given no real feeling, which sticks out against a large, sensational ensemble.

Directed by Bob Tomson and Bill Kenwright with design by Andy Walmsley, sound design by Dan Samson, musical direction by Kelvin Towse and lighting design by Nick Richings, the aesthetics of the show are as thrilling as always, and Taylor and Corlass deliver superb performances as Mrs Lyons and Linda.