Into the Woods is a dark delight 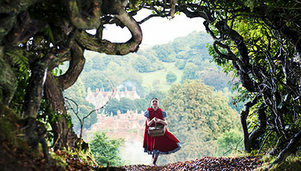 Into The Woods is both sweet and dark.

The film adaptation of Stephen Sondheim’s musical Into The Woods has arrived and it is delightful and dark. Viewers are drawn in by their favourite fairytale characters, music and magic and it seems that City Screen has fallen under this film’s spell.

City Screen has gone all out for the release of Into The Woods, bringing together some of York’s creative bodies.

The foyer has been decked out with ivy and turned into a wooded glen by designer Mahlah Hall, while Dr Sketchy’s Anti-Art School has been bringing some of the characters to life. On Monday, Yorkshire Wildlife Trust will be in the foyer to join in the fun and talk about the work they do. 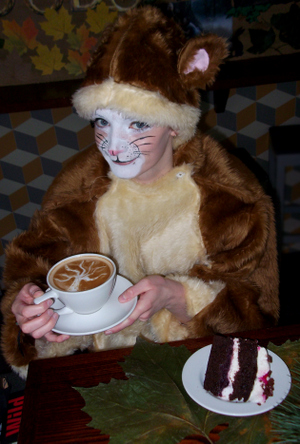 Emily Denison as a dormouse enjoys a slice of cake and Fi Rowntree’s coffee art.

Tickets for the Into The Woods are currently on sale at City Screen.

What did we think of the film?

It’s warming to the inner child to see popular fairytale characters brought together by Hollywood. There’s Cinderella played by Anna Kendrick, Little Red Riding Hood portrayed by Lilla Crawford with Johnny Depp as the Wolf and Jack of Jack and the Beanstalk played by Daniel Huttlestone.

The story follows a baker and his wife – James Corden and Emily Blunt – as they try to reverse a curse to remain childless, placed on them by a witch (Meryl Streep). They are tasked to go into the woods and collect four items, where their lives become intertwined with other fantasy characters.

Those unfamiliar with the play may believe that this is going to be a sugary mash up of fairytales, simply designed to make you laugh and smile. Indeed, having a cast of such big actors play out well-known stories, with an added dash of comedy, make the film feel like the ultimate pantomime.

However, as the narrative goes on, the violent undertones of the tales slowly emerge and the overall narrative seems to stray from its course for a happy ending. Some could read this as a metaphor for life: events do not always lead to sweetness and joy.

The songs themselves do not tend to stick in your mind beyond the fact that are all fairly similar in tempo and key, although it is easy to follow the lyrics and accompanying imagery so they are useful for moving the story on.

They can be a vehicle for comedy at times, such as the duet between the princes Chris Pine and Billy Magnussen, which also seems to be a cheesy excuse for a show of eye candy.

All the leading actors are endearing in their roles but none more so than Streep. She delivers her lines with power and wit and her singing voice is nothing short of alluring. Streep is so interesting to watch that, although she is the villain, you pretty much end up siding with her.

2 Responses to Into the Woods is a dark delight