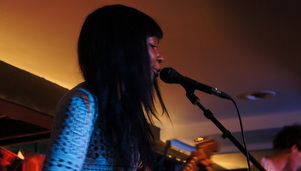 Junk are a low-fi jangly pop band from York.

Headlining the night was Junk, with an upbeat and low-fi jangly pop sound. The Missing Kids accompanied them, proclaiming themselves as ‘shoddy guitar pop’, while Fat Spatula, who describe themselves as ‘transatlantic guitar racket’, gave a more punk-flavoured performance.

The Missing Kids opened the night up with a mixture of lively, buoyant tunes and a few mellower, emotionally stirring tracks, effectively setting the tone for the evening. Despite performing as a two-piece, they achieved an impressive depth of sound – the fuzzy guitar and bittersweet vocals carried by a relentless drum beat. It all came together, creating a classic indie sound sure to warm the soul of drifting twenty-somethings.

Next, Fat Spatula brought extra volume and bass. The heaviest of the three bands performing that night, they did so with energy and enthusiasm. Their unmistakable punk sound added a different flavour to the evening, but despite their vitriolic lyrics, their high-energy pop presence let them blend in seamlessly. A highlight was the song ‘Munchies’, in which the lead vocalist reached impressive lyrical speeds that might have reminded audience members of System of a Down’s Serj Tankian. 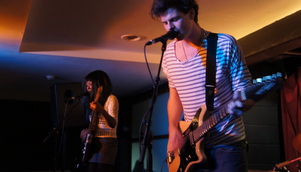 Finally, fans of indie pop will have recognised something of the twee bounciness of Architecture in Helsinki, Tennis and Seapony in Junk’s music, though with a British twist. The subjects of their songs are refreshingly down-to-earth, including such things as relationships, parties and getting drunk. The band’s two vocalists, one female, the other male, gave their songs a diversity, and the contrasting tones blended together to create something multi-layered.

Throughout the evening, the band members entertained the crowd with humour and the atmosphere was one of warmth and good spirits. The music made a joyfully defiant contrast to the dark and miserable winter night outside. Junk, in particular, with their jangly, summery guitar riffs,  were able to transform the cold, windy city of York into a sunny Californian beach.

It was a great display of some of the talent York has to offer.  Fat Spatula and Junk are both set to release EPs in the near future.

One Response to Junk, Fat Spatula and Missing Kids party at Basement