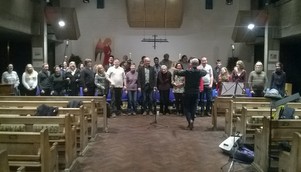 Mental health service Converge is teaming up with Jorvik Viking Festival to create a soundscape for this year’s festival in February.

Taking the lead on the project is community musician and lecturer at York St John University Chris Bartram and Converge music tutor Matt Dawson, who are working with Converge students to create a soundscape that fits with this year’s Brave New World theme.

A soundscape is a combination of music and sounds that creates a particular scene or narrative. In the case of this project, it creates an aesthetic reminiscent of the Vikings.

Speaking about the research that went into the soundscape, Matt said: “We listened to samples of English folk music and an Anglo-Saxon pan pipe tune, also poetry and kennings for inspiration. Some of the students visited the Jorvik Viking Centre to get hands on experience of the history.”

The soundscape utilises music, words and sound effects to present the theme of Brave New World, accompanied by video and images, and will last around ten minutes. It will be played on repeat in Barley Hall and on the Jorvik Viking Festival website from the 14th to the 22nd February.

An extension of Converge

Chris was originally approached to find out if he could do the project and he then asked Matt, who has experience of making live recordings, if he could help out.

Matt says it offers an extension to the courses that are available at Converge throughout the semester. Converge offers users of mental health services a chance to learn about the arts in a university environment, helping them indirectly through teaching rather than focussing on mental health problems. Matt, who teaches music as part of the service, explains that it has a great effect on students and that Converge is gaining popularity year-on-year. 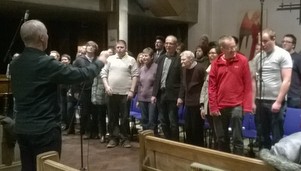 He added: “The ‘Brave New World’ project in particular has given Converge students ownership of a composition and experience of the recording and composition process. It’s been an experiment. We all experienced a different kind of sharing; having to be aware of the protocol of recording instead of playing more freely and constantly assessing the direction and vision of the piece as a group.

“Projects like this forge lasting connections between organisations, so hopefully Converge will be able to work with Jorvik again and branch out to other organisations. It also gives Converge a platform for promotion so its message can be spread and also get some recognition for the students’ work.”

Matt hopes that this soundscape will showcase how the arts can help people with mental health problems: “I think it will raise awareness of the benefits of Arts to mental health and shows that people with mental health issues can have a voice through Arts. It’s important to remember that all of us will suffer from mental ill-health at some point in our lives and it’s something that still is not fully recognised or publicly accepted.”

Tickets to the 2015 Jorvik Viking Festival can be booked through the event’s website.