Fallen Fruit: the comfort of oppression, the chaos of change 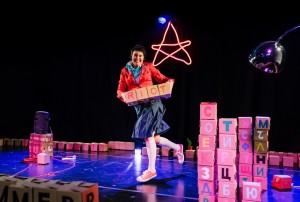 Two Destination Language (“intercultural dialogues in theatrical forms”) present their second run of this tale about belonging, nationhood, identity and politics at York Theatre Royal Studio. Writer-director Katherina Radeva turns her unique energy to a playful, moving and colourful jigsaw of narratives ranging from the personal to the international, intertwined beautifully under the dramaturgy and direction of Alister Lownie, framed perfectly with sound by Tim Blazdell and lighting by Vince Field.

“Are we ready, comrades?”

The widely-acclaimed Fallen Fruit has won over critics and Fringe audiences alike, and it’s easy to see why. Everything about this succinct seventy-minute piece is structured and precise, while charming and galvanising. Radeva’s commanding persona takes us from classroom to countryside, coffee shop to gameshow, the kitchen to the Berlin Wall. Strolling the space with a cup of tea as we enter, she opens the show by conversing with the room over playground noise; “How are you? Have you had a good day? Have you had your dinner?” before teaching us the Bulgarian alphabet through call and response. She is controlled but encouraging, inviting disciplined engagement.

Dressed in small totems of a school or scouting uniform, she moves within a carefully constructed square marked out with hundreds of tiny cardboard boxes, some painted to denote letters and later ingenious character signifiers, others remaining a mystery. Sweet gimmicks such as drawing in the air with her finger introduce a sense of play. We learn how, “Back there, back then, where I come from…” there are a lot of flats, a lot of grey, and everything is red.

“The cockroaches get through. The noise gets through. I need to find the cracks.”

Two standing lamps, a stereo and a hanging striplight star add to a tangible, tactile environment we are encouraged to take note of. Sound is controlled from within both the performance space and the tech box, giving Radeva ownership of the story with subtle complementary shifts. This sense of ownership is revisited in various instances of responsibility; early on we hear how, “back there,” food is planted, grown, plucked and eaten by the same hands – people are connected to their surroundings and their input, creating their own living. And then, these trees reach a mid-life crisis, and Pink Floyd drives a revolution on Bulgarian TV. Radeva is forced to consider when anger is justified; when it is useful.

Frida and Stacey, the rebel and the mouse, share a clandestine romance forced to the margins but spanning a lifetime, which forms a touchstone for Radeva’s story of many interweaving threads; survival and perseverance shining through the strands. Other highlights include a mischievous and cutting gameshow, What is… Boxed Up?!, in which the audience are pushed to decide on philosophical, economical and political matters, with a dash of Minnie Mouse and anarchy thrown into the mix. Correct answers are rewarded with coveted Junior Party Memberships, and a self-selected Authoritative Man helps us deliver a final bill.

“Voices can be heard. They can make a difference.”

The elemental, the bizarre and the inspiring come together again in the final beat, starting at a heartfelt gratitude for David Hasselhoff singing about freedom atop the Berlin Wall, developing into a pumped, meditative choreography of boxing moves and endurance, culminating in a salute to peace that draws all eyes forwards. We are disarmed and unified by the exponential optimism and vulnerability of fragile, disparate bodies standing up and connecting with world events from their corner of our planet through their televisions and their dreams. Ending with more tidbits of humour and humility from her own experience, Radeva addresses a White British audience with prompting expectation: think, hope, shout, strive, progress.