Impromptu Shakespeare: or, What You Will [throw into the bard’s britches] 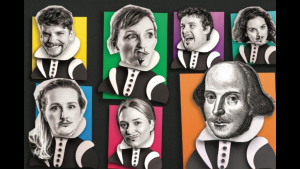 Taking a moment for the audience to marvel at their glorious hairy upper lips and proud theatrical gait, the talented trio then invite the crowd to throw their suggestion ping-pong balls – gifted to them moments before by Front of House – into the Bard’s breeches while they do their “Elizabethan dance” (remarkably resemblant of the Crab) to House of Pain’s Jump Around. Hilarity ensues.

Also ensuing is a tremendously sweet-natured and impressive long-form piece of improvised theatre in the style of Shakespeare’s dialogue. Fed by the ever-so-Shakespearean ball-prompts (‘gift’, ‘letter’, ‘fletcher’, ‘gravedigger’), the action abounds in animal analogies for love and pain, questionable science and bowel movement puns. [Exit inhibitions, pursued by your care.]

What makes the show so satisfying is the devotion to the art that radiates from each performer. A truer version of Shakespeare was never spoken, somehow, than these fleeting fancies made up on the spot, because the spirit of the thing is so sincere. The genuine love with which each suggestion is brought into the ring, and that with which it is received and built upon, gives the comedy an earnest sense of reward. And while the narrative (a cohesive, layered one, it should be noted) is joyfully funny and mischievous, it does not forsake all else for laughs.

From Munns’ heightened, romantic odes to friendship (do we spy another gay Sebastian in the making?) to Sturgeon’s subtly different personalities as a lovestruck heroine and a patient and stoic fletcher, to Jordan’s easy switches between mumsy nursemaid and gallant hero, all three actors are dedicated to checking in with both the prompts and the original inspiration, creating a completely authentic feel. Jordan’s nursemaid cuts to the core of poignancy in a moment of memorial for her late husband: “I would wish for a storm of bears.” We recognise these new scenes of love, pain, relationship- and character-building, and flowery speeches it is hard to believe were not penned in sixteenth-century Stratford. What’s more, there is no one-upmanship to lessen the effect.

Even as they do pay such faithful homage to the Bard’s way, they call out some more dated tropes. When asked to illuminate the mysteries of how to talk to women, our hero Matthew (Jordan) refreshingly responds, “Why, you may speak to women as though they were normal people!” Toby the deflated fletcher’s assistant (Munns) makes a lark of his lack of ambition: “Milk and walking is enough for me.” Sturgeon’s ethereally fae wedding song hits the mark again. The troupe displays with finesse that one can achieve the greatness of Shakespeare’s canon even without the words, if you attend to the heart of it. The audience gasp, cackle and melt in tune with every revelation and unravelling.

Trumping Austentatious and Any Suggestions? immediately in inventiveness, synergy and a relaxed, progressive approach to gender-casting, Impromptu Shakespeare is a literary-theatrical power flex you can but applaud, and will leave you hungry for more. See it as often as you can.

Impromptu Shakespeare played at the Great Yorkshire Fringe, and continues on a UK tour culminating in a run at Edinburgh Fringe Festival, tickets and further information available here.