Any Suggestions, Doctor? The Improvised Doctor Who Parody: red, blue and white all over 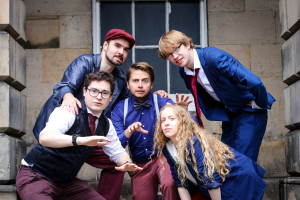 Any Suggestions Improv present their smash hit Fringe comedy Any Suggestions, Doctor? The Improvised Doctor Who Parody, taking their who, where and title from the audience and their atmosphere and fanbase from the everlasting cult classic Doctor Who. A die is rolled to determine which performer will assume the role of the eponymous Doctor, locations are hurled from the auditorium to the stage, and an episode title is drawn from a fez.

Improv is widely known as hit-and-miss, especially when you let the audience take the steering wheel. The luck of the draw leaves this show with a guiding theme of poo, to the visible deflation of some of the audience and cast. “Strap in, everyone!” Cue the theme song we all know and love, before we are launched, willing or not, into It’s T.A.R.D.I.S., not T.U.R.D.I.S.!

No doubt tickling the intergenerational audience of families and fans, there is something for everyone at some point or another, although the frequent off-hand political comments tend to fall flat. As with Austentatious, the show’s success leans on the recognisable traits of the source text, though with less commitment to its tone of delivery. But that’s not to shun the interludes of “Ok, Google…” and the escalating Maroon 5 references.

Harry Whittaker (Minster FM; Mind Over Matter Theatre Collective) and James Gamblin (The Shambles; The Room: The Musical) are the most engaging, adaptive performers in the troupe, comfortably guiding the storyline back onto the tracks and providing an intuitive sense of the audience’s place throughout, ensuring we’re back in the room after any derailments. Whittaker’s perturbingly Alan-Bennett “six-year-old boy from Yorkshire” provides structure and depth, while Gamblin checks in with the audience via gentle jibes. The team as a whole could be more cohesive; the hiccups aren’t dwelled upon but there is a lot of suggestion rejection – improv’s most deadly crime. Of course some self-referential comedy of errors can be rewarding, but it needs to be earned with more commitment to the cause. The accents in particular should come with a warning.

Making up the rest of the on-stage ensemble are Lewis Dunn (The Diary of Thomas Pooler; Presented in Mono), Charles Deane (The Clandestine Sketch Show; Newsjack), Louise Jones (The Room: The Musical; Channel 5 Seasonal Movie) and Matthew Stallworthy (Lip Sync Lollapalooza; Haus of Dench). So, yes, ‘five men and a little lady’, all white. A token acknowledgement of the gender [in]equality is made as a joke during the show, but there is little evidence to convince that “we are really trying to address it”, as Gamblin’s German “Doctor of Science”, Heimlich (yes, of the manoeuvre), states. The limiting declaration on “the only woman in Area 51” that handcuffs Jones firmly to her character does not go unnoticed.

Chilly blue LED ropes and spots light the space, which is bedecked with a long, narrow platform placed a little too close-for-comfort to the metal balcony supports (“Ok, Google, what is a ‘Doctor’?” “It’s what the actor needs now he has left the stage.”) Live music provided by new cast member Nick is perhaps the most responsive element of the show, manipulating a radiophonic workshop with ease and creating a seamless audio backdrop emotionally in tune with the action. On entry he builds an industrial futuristic atmosphere reminiscent of John Carpenter’s Escape From New York. There is also plenty of joy to be had in the mischievous traps the performers set for each other, from Maroon 5 covers to acrobatic dance routines, as well as the nods to black[hole]box theatre’s lack of visual indicators: “Can’t you tell? I’ve been green this whole time.” Mostly adorned in smart outfits of red, white and blue, the Anglophilia of the fanbase is palpably pandered to. Sadly, no daleks suggesting, “WOULD YOU CARE FOR SOME TEA?”

Any Suggestions, Doctor? The Improvised Doctor Who Parody played at John Cooper Studio @41Monkgate on Sunday 21st July 2019 as part of the Great Yorkshire Fringe. Read more about the company and follow them on tour here.