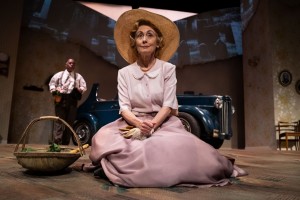 With a cast of three, Suzann McLean’s Driving Miss Daisy is a short and sweet snapshot of a friendship spanning 25 years and a historical commentary spanning much further. Based on the 1989 film, 72-year-old Daisy Werthan (Paula Wilcox) is horrified when her son Boolie (Cory English) suggests she needs a chauffeur after she crashes her car, yet again. When Boolie finds African-American Hoke Colburn, (Maurey Richards) an instantly kind-hearted and funny character, the scene seems set for a warm family-friendly comedy about an unlikely friendship.

Only this play is set from 1948 to 1973 in Atlanta, Georgia, against both the figurative backdrop of the American Civil Rights movement and, more literally, projections of newspaper clippings and Billie Holliday’s “Strange Fruit”.  While Driving Miss Daisy often feels like silently witnessing one long conversation about tins of salmon, upholstery or seeing friends at the grocery store, the dialogue never quite stops when the actors stop talking. Cosy domesticity intermingles with Daisy’s fears of losing her independence and Hoke’s struggle to maintain his dignity in the face of oppression.

A small cast puts the characters’ relationships with each other, rather than their relationship with the outside world, in the spotlight. Even in the smallest moment, a quick glance or a beat of silence, the main stage at York Theatre Royal never feels empty. English, Richards and Wilcox have mastered the subtle complexities and wry humour that brings each character together. It’s not surprising that, when flicking through the programme before the show, it is revealed that Paula Wilcox almost didn’t go for the part of Miss Daisy for fear it might be “dated.” Without seeing the production or the 1989 film, it’s clear this is no clean-cut subject matter. Yet, while the audience might be on tenterhooks in scenes where Daisy refuses to let Boolie take a break on a long journey or Boolie reveals (to Daisy’s shock) that he cannot read, Wilcox, Richards and English tackle each scene with tact and humour.

Powerful messages are as commonplace as cups of tea in Driving Miss Daisy, toeing the line between comedy and hard-hitting commentary. This isn’t a production for those who want a showstopper, unless that includes rotary telephones appearing from seemingly everywhere on set, but it is certainly for those who do not only love theatre for it’s grandeur but for its quiet exploration of human nature.